Novos Architecture Studio renovated Moda Pier, so that it can be used as both a pier, a book-café, and a library.

Throughout history, being located at the intersection of transport lines due to its geographical position, İstanbul has been a transfer station for people from all around the world, on both commercial and touristic routes. While the sea transportation in İstanbul, resting on the densest networks in between Asia, Europe and Africa, is recognized as an international value it has also local importance due to its major effect on the modes and the character of mobility of the city. The morphology of İstanbul shores and the intimate relationship between inhabitants and sea, increase the significance of ferry rides in daily life and urban transportation. Starting from the years of 1840s, sea transportation in İstanbul develops mainly around the Golden Horn. Ferry lines that will expand through Anatolian side in the following years, becomes a critical part of the historical and social development, spatial and mobility structure of the city.

On the other hand until the mid-19th century it is surprisingly impossible to encounter to a pier that ferries or ships can approach, make passenger and load transfer on Bosphorus. In these years when Şirket-i Hayriye was just found, passengers can only be delivered to the land by the help of small boats. Finally, at the beginning of the 20th century, it was taken action to fix the demanding and complicated situation. Planned fully open, first pier and waiting areas were started to be built on the shores of Rumeli and Anatolia. In the following years as the number of piers increases, the waiting areas on piers are being planned as close and comfortable spaces. In 1914 almost every pier has its own closed waiting area. In the process of pier and waiting hall construction architect Vedat Tek designs three different pier project; Haydarpaşa Pier, Kadıköy Pier and Moda Pier.

Moda Pier, designed by Vedat Tek in between 1916-1917, was closed in 1986 by the reason of passenger scarcity. In the intervening 70 years, building hosts a number of programs. Originally planned and built as a pier, Moda Pier functions as British Yacht Club, seaside casino and restaurant respectively. In different eras, being used as both infrastructural component and recreational space, the building especially with its exact location in Kadiköy seaside, is embedded as an iconic structure in the collective and urban memory. However the building is closed for good in 2015. In recent years the actions are taken place for the revival of the pier. 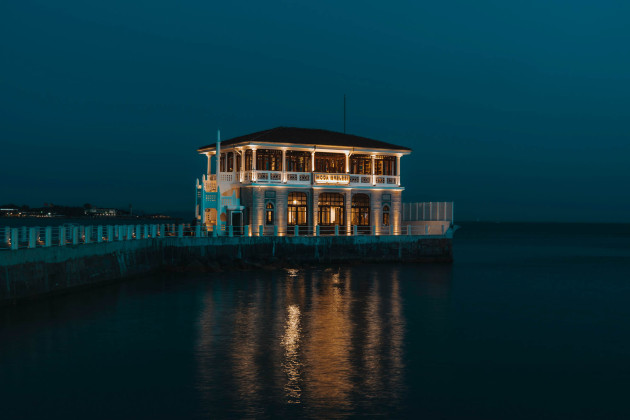 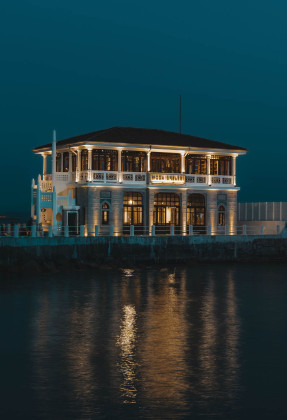 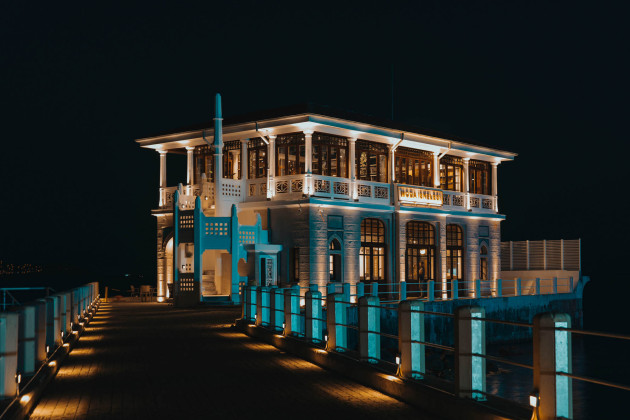 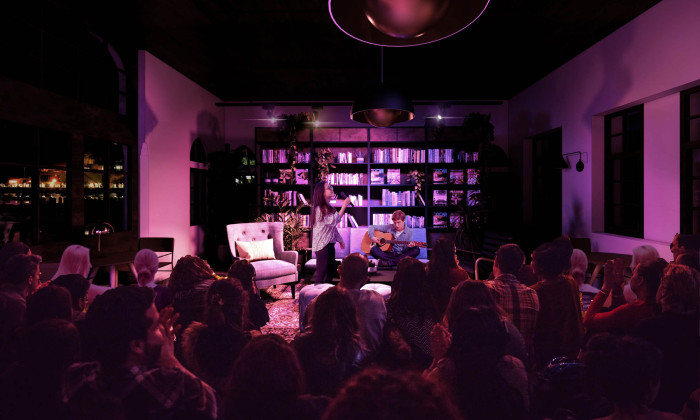 After the restoration project and an intense construction period, the re-functioned Moda Pier opens its door to the inhabitants. Today, it is proposed that the building functions both as a pier and a book-cafe with a library. The main purposes are to encounter the needs of the era, to improve the role of Kadıköy in sea transportation and to strengthen the relation it makes with sea through the mix programs referring to the piers multi-functional history.

The path that follows the Moda Avenue and connects to the pier is taken as public space. Sitting area in which urban fixtures are located is planned at this in-between and part of the pier area. Consequently the long and thin path between Kadıköy seaside and the pier becomes not only a transportation axis that one passes in a rush to catch a ferry, but also a recreational space and an organic extension of the city. Ground level is designed as book-cafe and working area. An infrastructure that makes it possible for the book-cafe to transform into a performance space on specific days and hours is planned. Additional and unoriginal walls are removed to create an open plan configuration. Services and toilets are placed on the short sides of the symmetrical planned building. Cafe and working area are located in between these services. On the ground level, in which a multi-functional and flexible layout resides, the damaged flooring is re-constructed according to the program and existing architectural atmosphere. Portable bookshelves and tables are designed for the daily use of this area. Layout scenarios can be easily transformed according to the altering requirements by means of mobile furniture. Thus the ground level of the pier becomes both a waiting area for the passengers and a performance area for the artists and the audience. 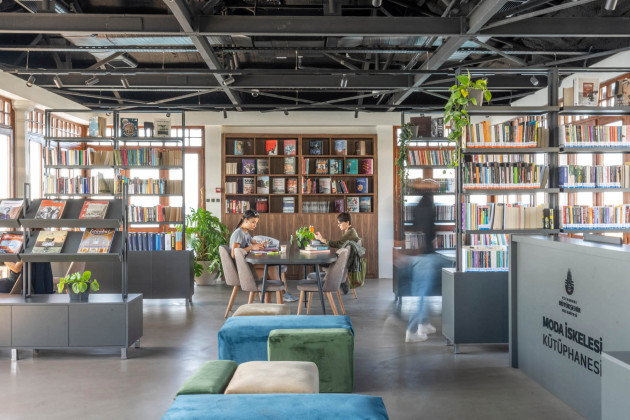 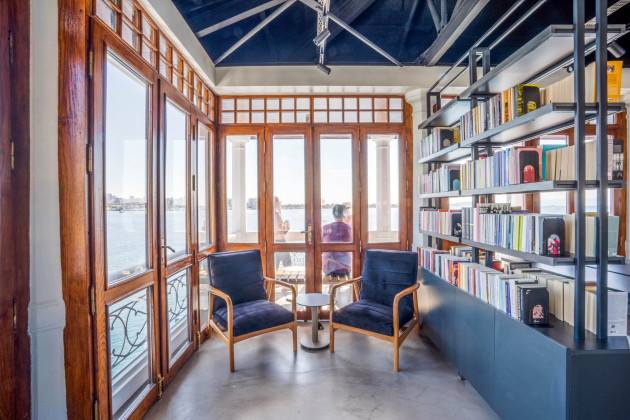 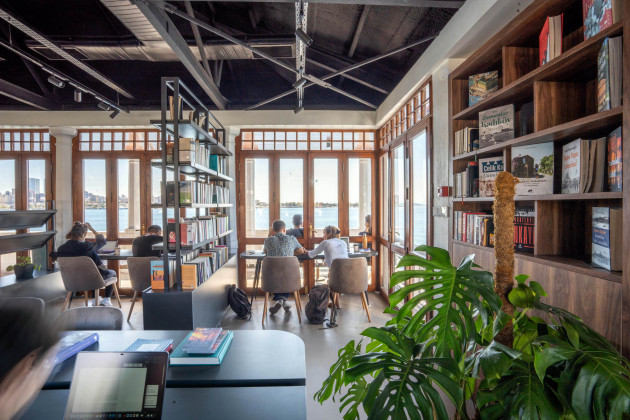 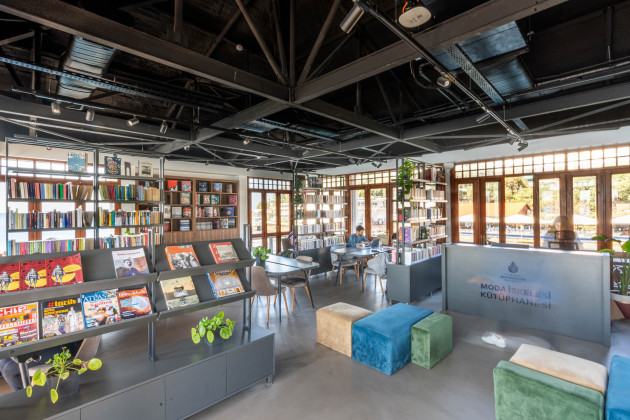 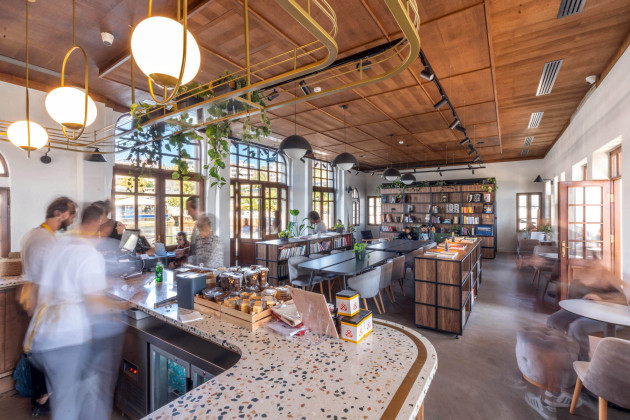 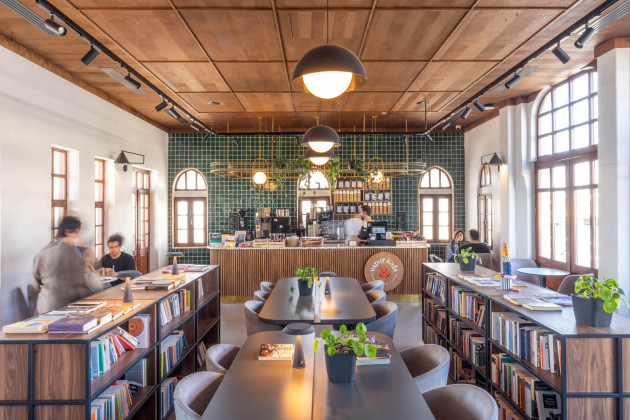 First level of the pier has more rigid character than the ground level in terms of program flexibility. In this area there are library and working areas. By nature of the program, acoustic and ergonomic comfort of the users is prioritized on this level. It is aimed to have a maximum capacity taking into consideration the social benefit and fair right of use as the pier being a public building. By removing existing suspended ceiling, the volume is expanded and the mandatory space is created for the technical equipment.

The façade articulation, materials and textures are preserved according to the restoration project as to avoid damaging Moda Pier which had penetrated the collective and urban memory and has a remarkable place in the history of architecture. Only the operations of cleanse and repair are made to the façade. At the interiors simple yet powerful materials like wood, brass and glazed tiles that can relate to the architectural atmosphere and tectonic characteristics of Vedat Tek building are used. 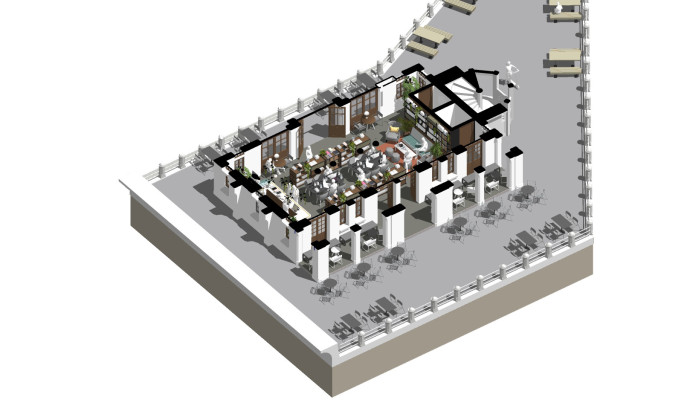 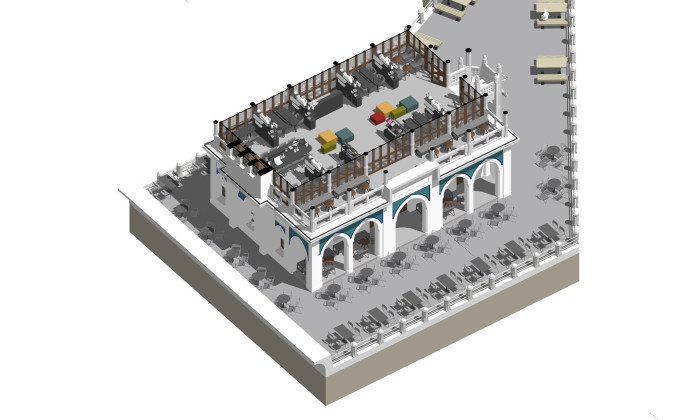 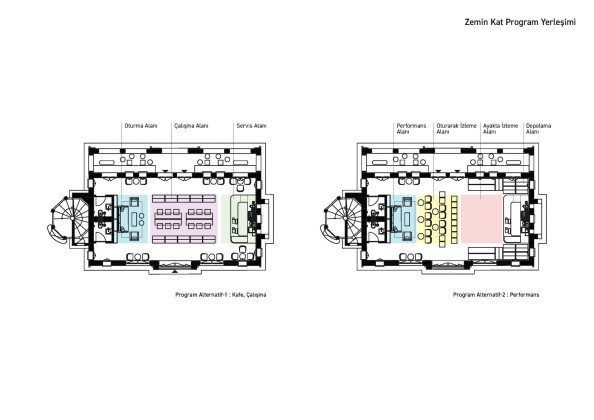 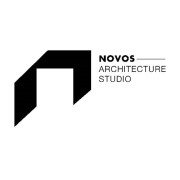