One Little Bourgeois Problem: Wanting Very Much but Being Unable to Preserve

The words that can be said about the isolation, disconnectedness, and contactlessness of the profession of preservation from the society are also similar to those about the isolation of the profession of architecture and even the academics from the society. In fact, preservation in the field of architecture is a little bit luckier from those in other specializations with respect to the following content: More concerned with the practical area than the theoretical area, preservation has the potential to touch the society a little more. Even so, as long as the reason and logic of being in the field stay the same, even spending all the practice time in the field does not differentiate the case of the preservation discipline from the other disciplines – in the context of the content of the relationship established with the society and the gains to be gained from this content. As a scholar who has carried out a large number of field work – and almost all of them with students – I must say that I have experienced more strikingly the degree to which the academic studies, the preservation profession, and in the most general sense, the architecture profession is disconnected from the society, as a member of the Council of Architects, through our work in squatting neighborhoods since 2015.

We see that, although still encountered here and there, the rhetorics of "senseless/uninformed/uninterested/illiterate society" are no longer valid in the field of preservation. In other words, those who bill the "illiterate" and "uncultured" society for the failure of the preservation areas in our country, Turkey, no longer exist, or they refrain from speaking such thoughts loudly. A handful of professionals who specialized in preservation are very well-”acquainted” with the ways, the forms and the methods by which the areas inherited from the past to the present are preserved; but, this information unfortunately – somehow – has been unable to be conveyed to the "illiterate" society, so people have been vandalizing what they have been supposed to protect, and destroying them for their personal interests and gains. I would say this rhetoric has lost its attractiveness over the last decades with the devastations and destructions at very large scales caused by governments. Preservation rhetoric seems to have given up on holding the destruction caused by the "illiterate" society at a single building scale responsible for the disappearance of nature and cultural assets, since it has stood by the irreversible destruction caused by the government and capital at massive scales. Even though the academia did not respond halfway-decently to the destruction of hundreds of square meters of neighborhoods from ancient times and hundreds of years old monuments, professional organizations and non-governmental organizations continue, at the worst, to be the followers and registrars of the entire process. 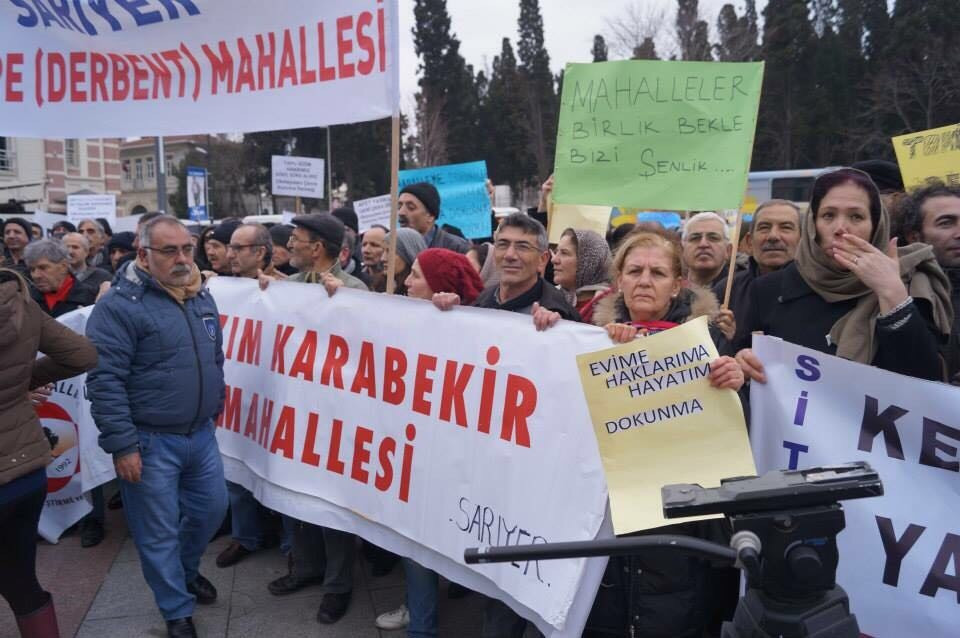 Residents in Istanbul’s Sarıyer district staging a protest against the municipality’s redevelopment decision.

For the first time in Turkey in 2013, a public space was "protected" or "rescued from destruction" through a civil commotion by a great safeguarding effort. The question "Why is the opposition shown for a park not shown for a monumental structure or for a neighborhood?" would be quite a cruel question, of course. It is known that the Gezi Park protests were not a park issue, but were shaped by many more factors and variables throughout the process. Nevertheless, I still find it worthwhile to discuss it through this point for the sake of benefiting from the provocative nature of the problem. Even if it would not reach the scale of a Gezi Park protest, why did a societal opposition not be formed, for example, on behalf of the Atatürk Culture Center (ACC); why could a large-scale agenda, which the academics or intellectuals tried to create, not be created? Although a great number of panels and forums were organized, and scientific or social opinions were presented, a wide-scale safeguarding did not, could not occur.

As another example, a number of initiatives have been made, including a street opposition for the Emek (Labor) Cinema. It has been told in many occasions how a historical and cultural loss the demolishing of this structure is. In the context of safeguarding the Sulukule District, there have been many studies in which the academic circles, artists and activists have worked very hard, and methods have been applied, such as creating an agenda and involving the locals in the process to prevent the destruction and loss of the neighborhood. There were so many – and with as many different qualities – actors involved in the process at the national and international scale that they were countless: artists, scientists, national and international preservation bodies, the chamber of city planners, the chamber of architects, environmental initiatives, social platforms...

Of course, it would be a shallow decision to evaluate all these urban movements and the actors of urban struggle by looking at the end point their goals have reached; that is, the fact that the neighborhood could not be protected and, in the end, was destroyed... There is no doubt that there are numerous conceptual gains and doctrines that embrace learned information, accumulations, transfer of experiences, production of knowledge, documentation, and cultural stratifications through social teachings; forcing our rational, instructive, libertarian, scientific, metaphysical... and imaginative limitations...

However, as I mentioned at the beginning of the article, I cannot help but ask the following comparative question as an academician who has worked with the community of the Council of Architects in a squat neighborhood for a few years: How come a large number of the activists, scientists and intellectuals are unable to make their voice heard and unable to be taken seriously while the poor people of Küçük Armutlu neighborhood, which only has a 30 years of history, could manage protecting their neighborhood by saying "our values, our legacy, our tradition, our history”. Nowadays, it is a matter of discussion that the Yıldız Technical University Beşiktaş Campus be vacated and handed over to the Presidency of the republic. Many scientists who have crowned their academic careers by questioning concepts such as place/belonging/safeguarding/leaving traces in the venue and by augmenting– or deadening – their meanings were easily convinced of this issue of displacement. They published emotional messages such as “what precious things they have lived in those places”; “they are leaving, but they will not forget those places” (by using lots of key words such as memory and cultural layer); “they hope that the new owners will take good care of their schools”; and even more detailed ones...

They did not demand an explanation based on scientific grounds, which are the basic means of an academic environment, and they did not even consider using any of the formal objection mechanisms, which they had the right to use in the absence of such reasons. I think the most significant difference between the local people – who safeguard the place in which they live and which they use, who do not let it get destroyed, and who defend it with their own soul – and the academic/intellectual community – who knows this identity theoretically, tries to share its knowledge with the public – is the phenomenon of Semantic Value.

The semantic value carried by the Küçük Armutlu neighborhood for its users is different – very different – than the semantic value carried by ACC, Haydarpaşa, Narmanlı Han (Inn) or Sulukule for their owners... Unfortunately, rights, belongings and legitimacy-related lessons and efforts taught in Küçük Armutlu are not taught to urban citizens. Apart from whether or not the people of academics, authors, intellectuals are willing to spend such an effort, I do not think they are even aware that such a labor is necessary, or that it is necessary to interlace this consciousness, by weaving step by step. The reason for this, as I have pointed out above, may be the destruction of the meanings of concepts such as place/belonging/safeguarding while they are being questioned. The reason may also be that the set of values of the economic and social class to which one belongs is established based not on attachment to, but on detachment from the place, or that the modernity places value on a mobile life, nomadicity and lives that can be rented in every city. However, solving this is not the point of this article. The important thing to keep in mind here is that the semantic value established through a place inevitably has a denominational nature.

It is for this reason why it is almost a fool’s errand thinking that the academia, which does not have a common semantic value attributed to its own concept of place, would be able to communicate to the people in Sulukule that the neighborhood cult owned by them has a semantic value as long as they are connected with that place, and that such a place could protect the semantic value by people who have safeguarded it for years, accumulated memories and established relationships with the surrounding neighborhoods. Just for this reason, just as in the case of Emek Cinema and Narmanlı Inn, it is not possible to create an agenda as wide as necessary to protect ACC, in order not to get it destroyed. Although the semantic value of these singular structures seems big and important for the academic community, it is actually not that significant. If it were, the academics would serve the public to share and raise this semantic value at any cost; they would display a decisive attitude to protect their place – that is, their values – starting from their own fields, universities.

That is why conferences, symposia, presentations and forums in isolated academic and intellectual circles; and whimpers in cocktail conversations do not go beyond a satisfaction scene without any concrete reality. Activist colleagues, who act as if they have carried out some kind of socialist sensitivities to polish their careers, which they built on democracy and social sensitivity, criticize the devastations and destructions with a mild tone that cannot be heard, if possible, while at the same time fidget in order to avoid losing their connection with the government and power. This can be seen as the indication of the extent to which a semantic value erosion is experienced in academic and intellectual communities. However, the semantic value constitutes a basis for human beings – a basis that makes humans humans – to establish a bond with the world; and this basis is, first of all, constructed by the place one lives, followed by the whole city under the guidance of the place. As I mentioned at the beginning of the article, the preservation discipline can be considered to be more closely related to this semantic value construction because, it is in the "field" more so than the other specialties. However, when I say being in the field, it does not mean to be together with the society, or to stand by the society; it means to be there “for” the society in the simplest and the most real sense. Being in the field for the society is about safeguarding the semantic values of the society together with the society – by becoming a part of the society – as well as the semantic values that exist within one’s own living space. 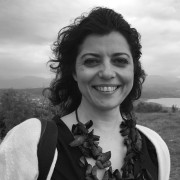 After completing her architecture education in Edirne, Doyduk completed her masters in İzmir Dokuz Eylul University on architecture preservation. She continued working on preservation during her doctorate in Yildiz Technical University and post-doc studies in Oxford Brooks University. After her assignments as research assistant in Balikesir University and masters studies, Doyduk worked in private universities in Istanbul and Northern Cyprus. She is currently part of the teaching staff and vice president of the Department of Architecture at Sakarya University.