A Desire to Slow Down

Kahrizak, an Iranian settlement which was surrounded by farmlands until very recently, has been transforming very rapidly into a city. The Apartment of Kahrizak, however, is slowing down and reshaping the intense production environment wherein it’s located.

The project was located in Kahrizak, a district in the southwest of Tehran, the capital of Iran. It is a neglected area that features a semi-arid climate and has seen a rapid growth in size and population in recent years to such an extent that it has been being transformed from a squalid urban district into a town. In the past, Kahrizak was a rural area whose lands were farmed to supply the residents of the capital with the fruit and vegetables they demanded, but due to its nearness to Tehran, its agricultural lands have been remarkably giving their place to urban blocks now. These changes in city scape are visible through time. This district does not represent a good public image in Iranian`s mind which caused by social and political movements and struggles took place in Kahrizak. This is the common image among layers of society with different social, economic and cultural class. This issue and other parameters (which will be mentioned) made this project for us challenging and interesting. This special situation took effect from the capital (which is in its adjacent) while affect it too. These parameters draws our attention to itself and told a special story for this project. The story is unfinished in other building in Kahrizak. 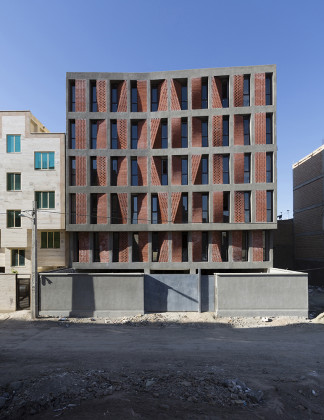 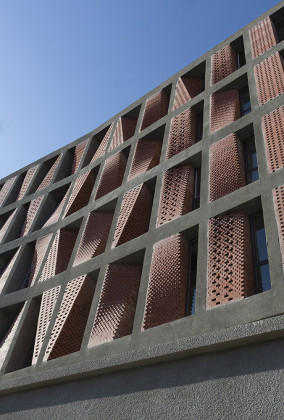 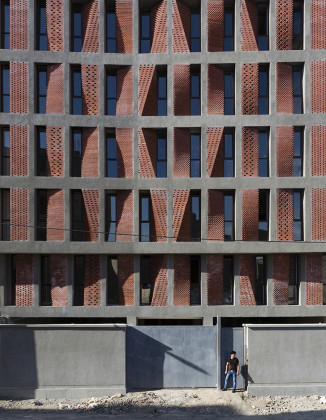 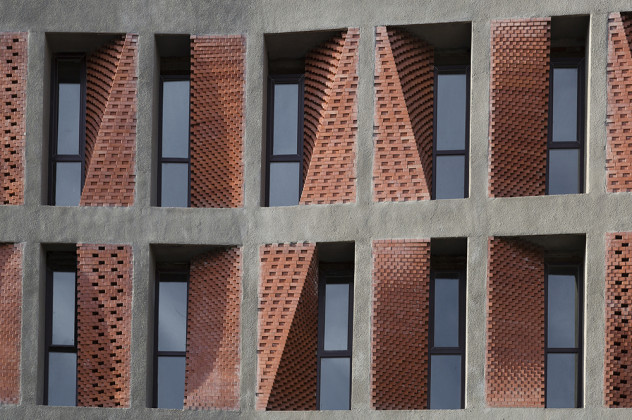 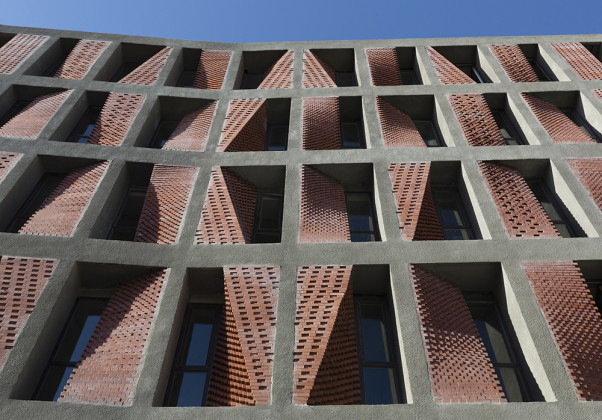 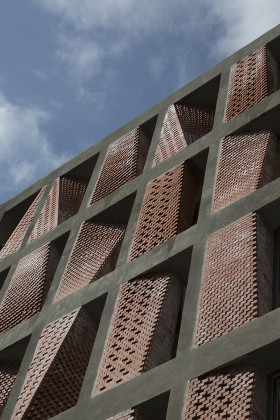 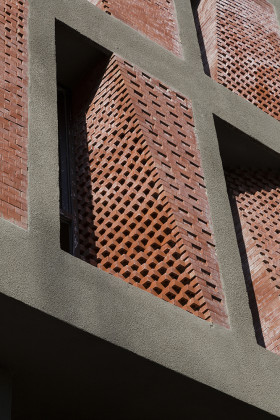 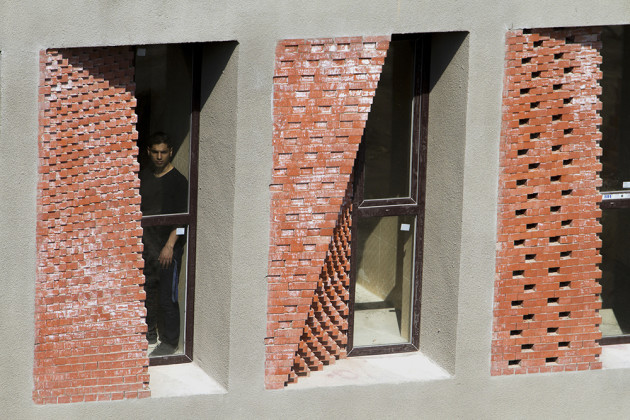 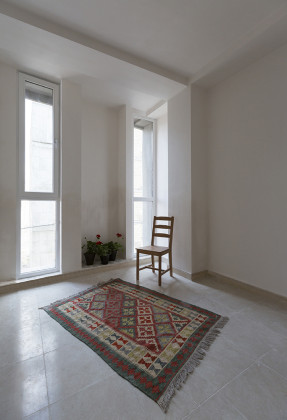 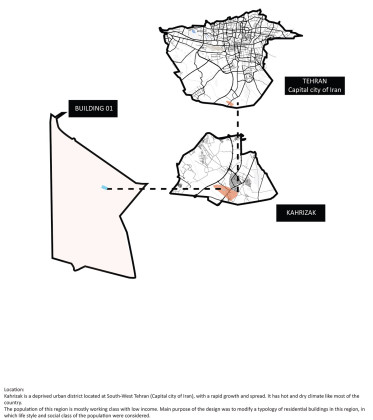 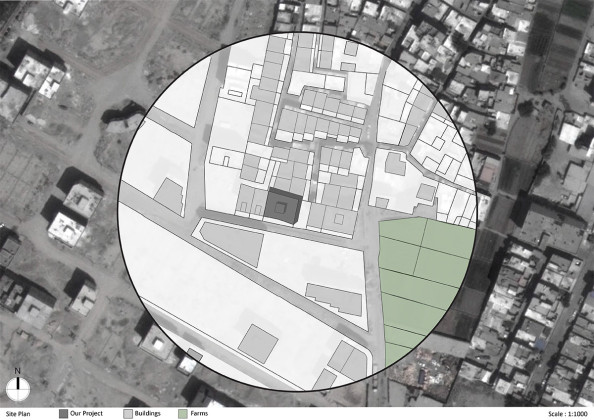 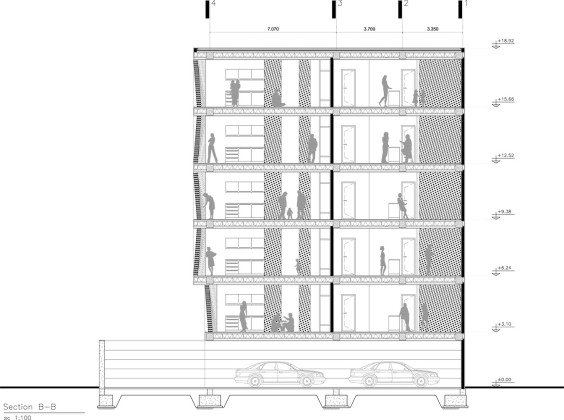 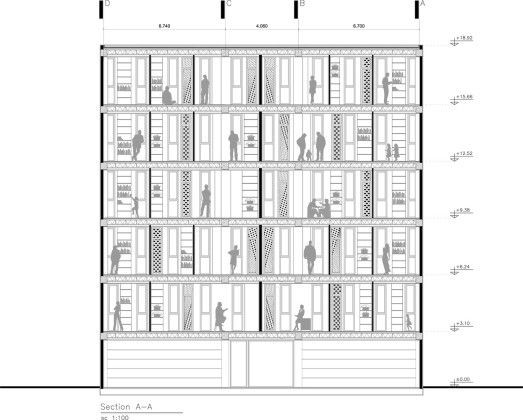 The dwellers of this region are mostly migrant laborers of humble origins and on low incomes. This people consist of two major groups according to their denominations: 1-Shia 2-Sunni

This categorization in addition to difference between nationalities of people living in this district define a special condition for this project. Future Residents of this project will be a combination of these different people and in a micro scale is an example of Muslim societies.

Because of the abject poverty they live in, their main concern in life is that of quantity rather than quality. Therefore, there is even a large number of residential apartments in Kahrizak, whose bedrooms are dim and have no openings to let the sunlight in; nonetheless, they are so popular because of their affordability.

The project was offered to us at the time when two stories of it had been constructed and the executor was highly circumscribed in his budget. The land on which the building was constructed was square with 18 m2 sides and the building itself was surrounded by other constructions from three sides so the only dimension from which it could enjoy the sunlight was the southern side. It is worth a mention that two 55-m2 units were built on each floor of the building so the best solution possible at the time we accepted this project was to maintain the conditions of the units in the north wing and enhance the quality of the units in the south wing to build up an effective interaction between the northern units and the urban façade of the project. To do this there were a few difficulties.

The first obstacle to conducting this project was the tight budget, therefore we decided to employ local workers and use inexpensive regional materials such as brick and concrete.

The second hindrance was the mismatch between the residents’ culture and the type of buildings built in the region. For instance, the big balconies constructed in the apartments were walled in and roofed in to either add some space to the homes or be used as storerooms. There were also some balconies whose residents walled them in with colored glass bricks in order to prevent others from seeing the clothes they put out to dry and this in turn stifled the natural light and spoilt the look of the building.

Considering the residents’ use of and attitudes towards balconies then, Brick, firstly as inexpensive material and secondly as a modular and proportional material which has many advantages in order to create different alternatives. We used brick modules to build the balconies and satisfy the residents’ needs and because the units were so small, we placed the closets and cabinets inside these modules to make the most of the space. We also used tall windows to boost the natural light inside the apartments.

When we were offered this project, there were factors such as the location of the project, the problems in the region, the poverty the residents lived in and the Client’s determination to improve the living conditions in Kahrizak that motivated us to find the best solutions possible to build accommodations appropriate to the region’s climate and residents’ culture so as to set an typology of design and construction in the area. Since there is a myth in our society that good architecture is the immediate result of good money supply so it belongs to the rich only, the main goal of this project was designing a construction enjoying quality and providing affordability. This goal could be achieved only through the effective interaction and cooperation between the architect, the Client and the collaborators.

There is a constant historical principle in Iranian architecture: the richness in details in coexistence with the representation of simplicity in overall scale which finally ends into merging with the context and matching to their functions. In Iranian traditional architecture users built their houses in a sustainable and climatic manner. This architectural considerations led into creation of a variety of typologies in different climatic zones of the country. We decided to be loyal to this principle in our project.

The choice of material was a significant parameter in this project mainly because we had to choose something affordable and easy to freight to the site. As a result, we considered clay blocks which were produced in a factory nearby and this meant a considerable decrease in the freight charge of the materials. The modules were constructed with bricks and we tried to find a suitable material for the module frames. The least expensive material that gave us the ability to create our desired sense of space was concrete. This way, we could reduce the cost of the project to its minimum. We used this reduction of cost to create the high quality interior spaces. After designing the project we started to train regional workmen. To make sure that they are skilled enough to arrange final modules we ran some test modules before the final construction phase started. The client’s patience, understanding and his trust helped the process.

The close collaboration between architect and the client caused the progress of this project in a half forgotten district and at last it reached residents satisfaction. The units were sold-out during the construction phase with the same price of a finished building in the neighborhood while there was so many completed buildings left unsold. This way we achieved the clients goal to gain profit of his project. That was what we all searching for; residents’ satisfaction, the clients’ benefit; A proper architecture from architects point of view and a good resume for constructors. Thus everyone who was somehow involved in the project was given what he/she tried to achieve.

As it may be seen in the project images we used clay blocks in the façade in a way that cover some parts of the terraces according to the reasons mentioned above.

Brick modules’ designs are based on Iranian geometrical patterns; each module was designed in relation with the function of the space behind it. Having variety in brick modules they are coherent and homophonic. That’s how it resulted in a smooth facade to represent both Iranian brick architecture and the essence of residential. In addition this geometry is concrete for local workmen and thus it facilitates the construction process. The geometry is also present in traditional residential architecture of desert areas of Iran. 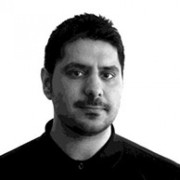 Mahdi Kamboozia received his professional degree from Shahid Beheshti University. He established CAAT architecture studio in 2010 and during these years beside management of the studio he has been working as design and construction team supervisor. He has achieved many national and international competitions.