The Rotonda del Viejo Contrabandista is part of the history and culture of Santa Clara del Mar, representing its "green heart" from the design of the urbanization of this seaside resort.

The Rotonda del Viejo Contrabandista is part of the history and culture of Santa Clara del Mar, representing its "green heart" from the design of the urbanization of this seaside resort. It constitutes a pillar of reference for residents and tourists and is part of the list of "Cultural Assets" that appear as historical-cultural heritage of the Partido de Mar. This project proposes a piece with a strong symbolic load that unifies and articulates the ends of one of the main axes of the seaside resort. It addresses the scale and identity of the roundabout and its surroundings in a single totalizing linear gesture, as suggestive as it is symbolic: an urban pergola, which organizes and integrates all the existing elements, reconfiguring a new image of belonging for inhabitants and visitors. The perimeter areas establish a neighborhood-scale relationship with the environment, forming public areas or squares of diverse identity. The chalet-museum and literary café plays a leading role in the design of the project: it is a nodal focus of attraction and a point of confluence.

Integration With The Environment
The roundabout is reconfigured as a center for urbanization and socio-cultural reactivation, a new node for the community that is established as the new public space - attractor throughout the year and that articulates the center with the periphery through Av. Acapulco as the main axis that runs from end to end of the town. A convening space for the development of all cultural, gastronomic and recreational activities.

Restructing Of The Road Scheme
A new accessibility to the main center of Santa Clara is proposed through an alternative road rearrangement that recovers the pedestrian condition of the main axis of Av. Acapulco from the entrance, thus recovering the extension of the commercial and gastronomic promenade towards both sides of the roundabout. While recovering the coastal promenade, decongesting the accesses to the roundabout and also encouraging the alternative use of bicycles and/or ecological transport that minimizes vehicular use. 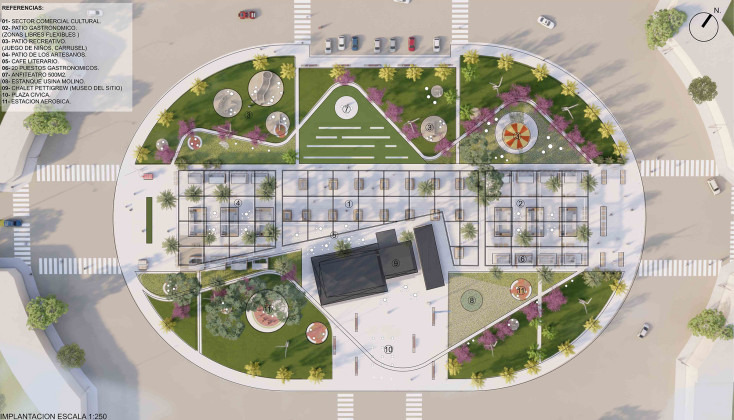 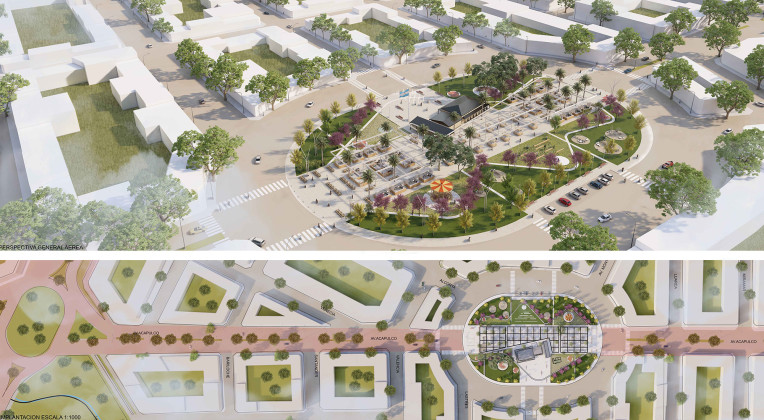 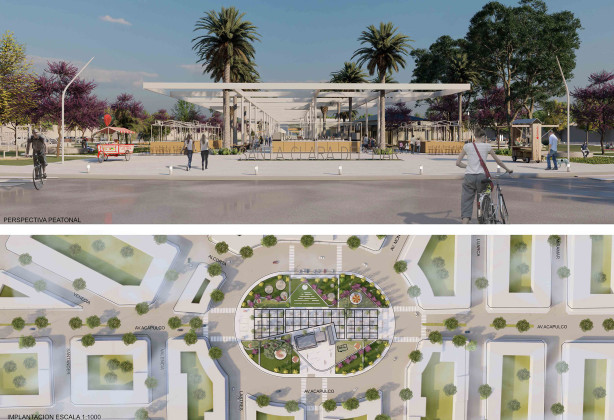 Urban Continuity
A pedestrian continuity is proposed on Av. Acapulco that crosses the roundabout, transforming it into a new event for the town, which provides recreational and cultural activities of multiple events. Being "the roundabout" the most important point in the promenade of the new commercial corridor for Santa Clara del Mar. This continuity guarantees the use of the entire main axis, being able to intermingle the commercial uses of both sides of the roundabout avoiding the fragmentation of activities that currently are produced.

The Great Pergola
The pergola is conceived as an integrating element and responds to two central objectives of the proposal: to articulate the existing architectural and natural elements that make up the landscape integrity and to constitute a spatial support for the new proposed activities. The Pergola scales, protects and integrates nature with artifice and materializes flexible adaptability modules below that can transform new configurations over time. The recovery of the roundabout as a new cultural, recreational and gastronomic space implies an act of generating support and permanence spaces for various events such as fairs, recitals, spontaneous shows, etc. The pergola emphasizes the pedestrian axis as a gesture of urban continuity and incorporates the dialogue of all the existing elements such as the chalet, the pond and the power plant and the existing vegetation as well as integrating the scales of the urban profiles that surround it. This grid or support frame, the pergola, materializes as a light structure that can modulate the entry of sunlight during the summer seasons. A 7.20 x 7.20 modular matrix or grid supported by slender circular columns. A game is proposed between the full and the empty, the heavy and the light, where respect for history and the existing vegetation that integrates it as a green space par excellence becomes important.

Pre-Existences
The recovery of pre-existing architectural elements is sought in a programmatic reconfiguration without losing the value of a cultural asset. Therefore, interventions on them are subtle and fully integrated with the rest of the proposal. In the same way, the existing vegetation is incorporated into the new landscape proposal, maintaining the most characteristic species and combining them with the new proposal. 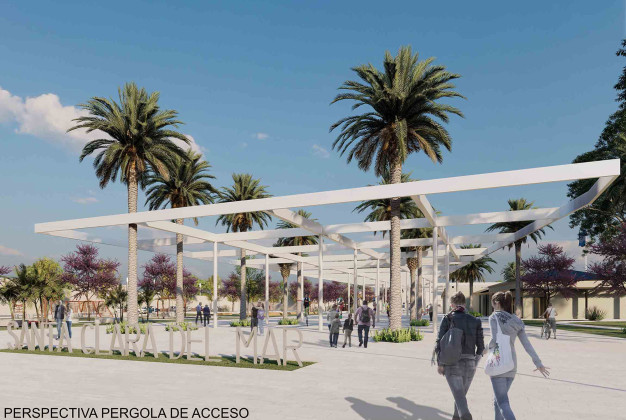 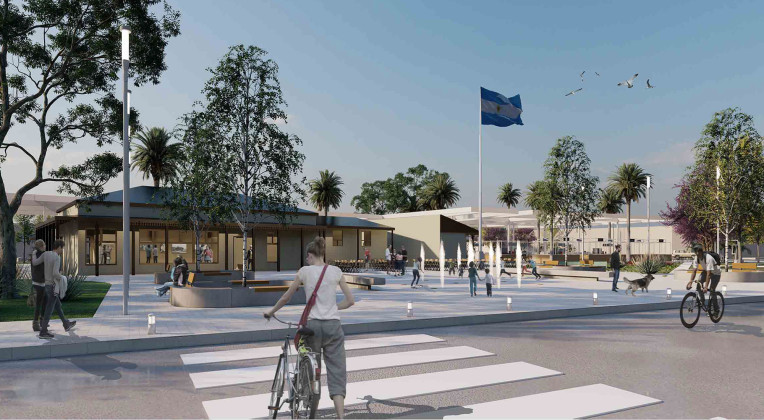 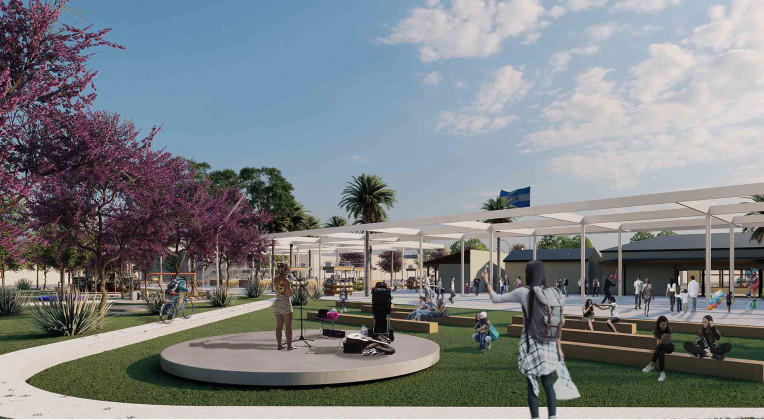 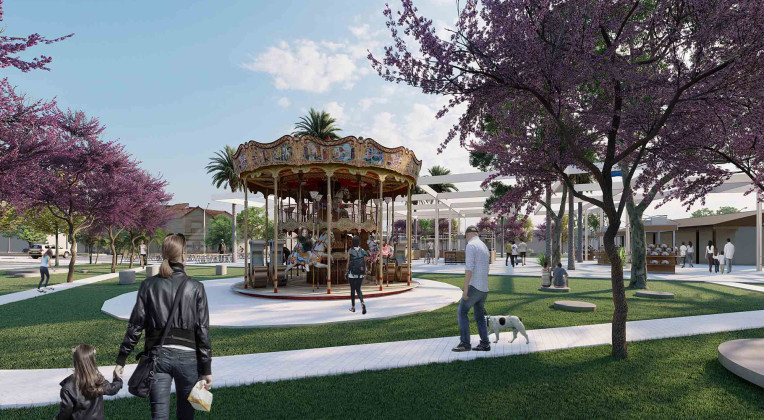 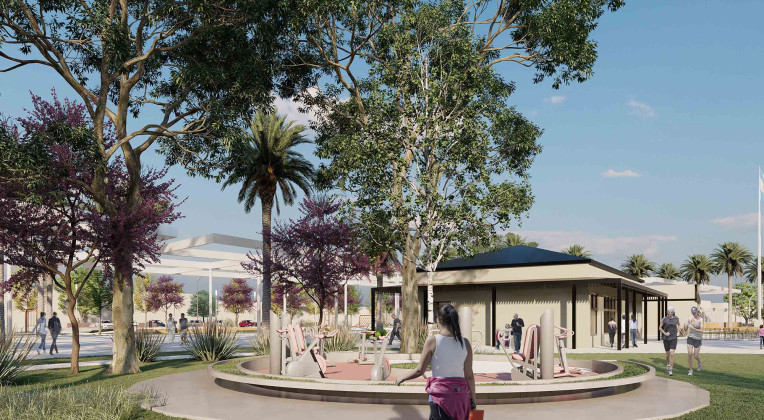 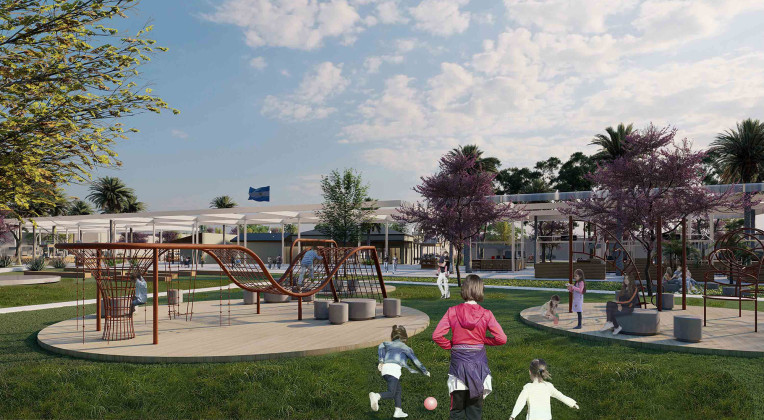 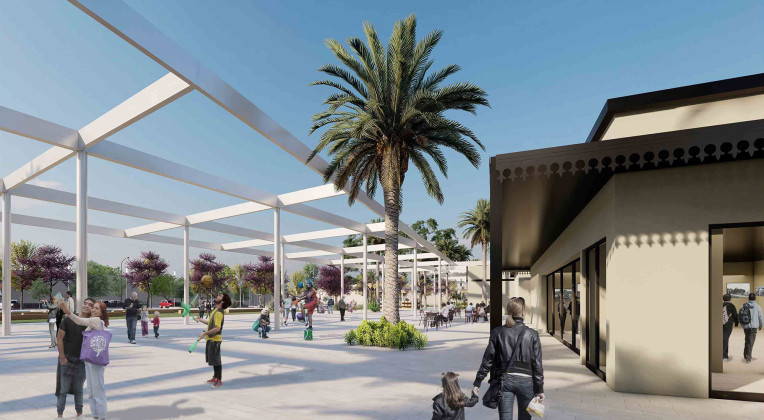 The Roundabout
Access and Borders: the accesses to the roundabout are given through the ends in continuity with Av. Acapulco while the sides respond to the immediate context, thus solving a perimeter parking in front of the daily shops and towards Gijon street a pedestrian access by means of a small civic plaza as the culmination of the streets that come from the waterfront. Programmatic areas The program is concentrated on the main axis of the project in a system of flexible use modules that can absorb from stalls and alternative commercial stalls, gastronomic modules, reports, recitals, spontaneous events, etc. Outside this programmatic axis, areas of specific complementary activities are developed that lie on the North - West sector, such as the Carousel area, the Children's Plaza and the amphitheater. While on the South - East sector, the reading or heritage areas stay under the trees, the recovery sectors and the civic plaza are developed. All of them are linked with a pedestrian path system that sews them together and allows a tour of all the programmatic points of the roundabout. The chalet is recovered as a new center of attraction in the center of the roundabout and with openings and expiations towards all the spaces that surround it. Thus integrating the literary café to the central promenade. Axis and green spaces We prioritize the recovery of the roundabout as a green space par excellence and the prioritization of the landscape over the buildings. Therefore, the proposal materializes only the main axis as a space for flexible activities, which are complemented by internal paths of lower hierarchies. These organically designed paths soften the proposal and are integrated into the environment through trees and equipment such as benches and lights that make these a new internal promenade with a continuous route. On the beach of the central axis, the use of palm trees was emphasized for the entrance sector that they emerge through pots that serve as natural drainage for rainwater. 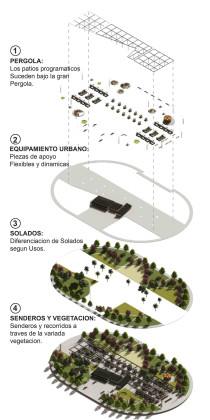 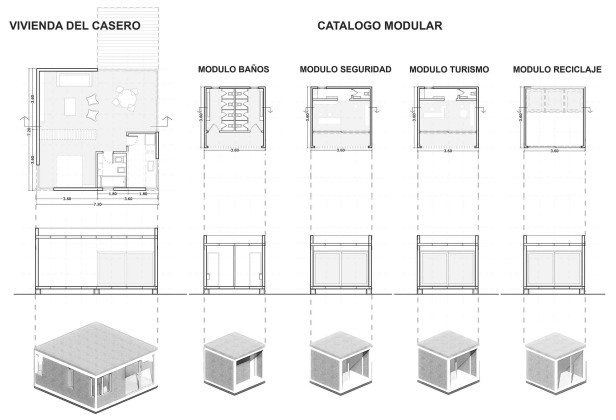 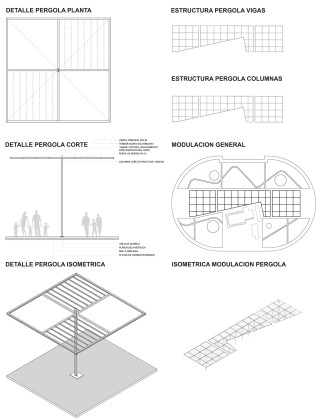 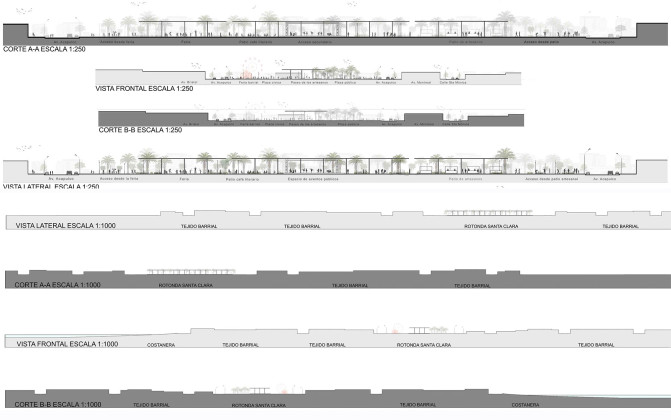 Flexibility
The search for a highly flexible space is the main objective of the project, which is evident in the main beach that supports multiple events and activities under the large pergola. Likewise, the project allows simultaneous activities in the lateral spaces (children's square, amphitheater, civic square, carousel square, etc.) The activities that take place simultaneously and in different places of the roundabout and temporarily modify its organization, but guarantees flexibility within the complexity of public space. Achieving flexible spaces in the urban scene guarantees its use and allows changes over time and even during the season, being able to absorb from minimal events such as street artists, retail, to large-scale recitals.

Stagebility and Growth
The project is structured in a sequence of component elements that are articulated among themselves, as an integrating proposal, but manifest the singularity and independence that is required for a future executive development in stages. The axis, the pergola, the pre-existence as a first stage. The second stage is completed by secondary trails and complementary vegetation. Finally, the design of areas is completed by lighting equipment, street furniture, benches and platforms, etc. It is the proposed structure of the project that allows in a first stage to give identity to the roundabout without the need to execute the entire proposal in a first stage.