Even though the concept of urbanization seems ontologically related to the change of location of the population, it includes many social, economic, cultural, political and biological changes. The climate crisis and epidemic diseases, which considered the pioneer steps of this collapse, are getting more and more worrying. Perhaps, this situation has already brought into question our relationship with nature, the coexistence practices of human and non-human actors in the ecosystem, and hence the human-centered domination established on nature.

The competition area and the quarry evaluated in this context. These two areas show two different uses that exist on earth. The competition area defines substantial social and spatial transformation with its continuous distinctions between nature, culture and human throughout history. The quarry experiences the natural environment and geography that people commonly see as a typical material warehouse or a geological detail. Therefore, it is inevitable to examine and consider the place of the design in the context of the human-nature relationship. 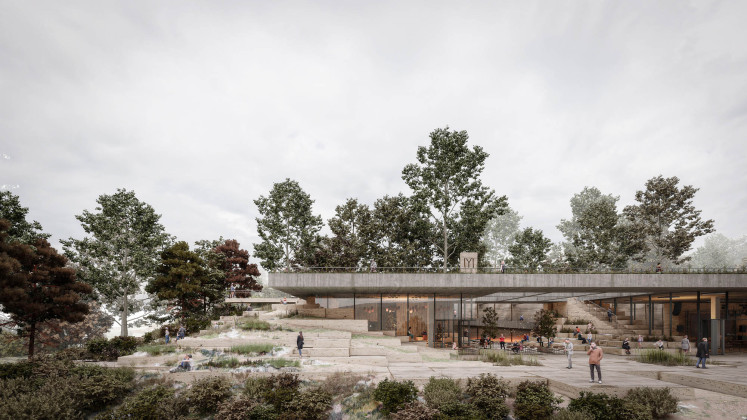 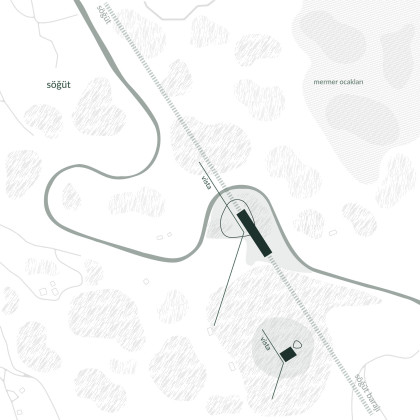 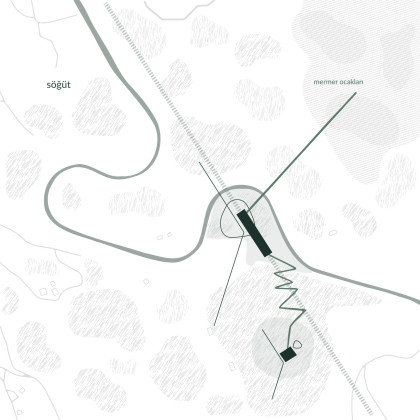 The importance of Söğüt's cultural landscape reflects in its history based on its nature activities, gardens, and endemically diverse countryside. Nowadays, the natural areas formed by the recreation areas and different activity-based programs have preserved as part of the cultural landscape. However, the contradiction in the landscape character in the hill topography that forms the entrance and encounter area to Söğüt is remarkable. The commodification of the natural beauties and commercial potentials of the geography inevitably leads to brown areas (quarry, excavation waste areas, etc.) that have also shown themselves in Söğüt. Accordingly the competition area is on the connection paths, is an entrance to the Söğüt district. Apart from these qualities, it offers unique pastoral and historical Vistas due to being topographically dominant stops. In all this context, it should be consider significant that this memory space, which creates the first impression about Söğüt, is a reminder of the exculusive geography and natural assets that the area contains on a high scale. The entrance area and the terrace-balcony encountered immediately afterwards are positioned parallel to the road in the eastern direction and comprise the endemic plants that do not need maintenance. The purpose is to reflect this identity by creating its own ecosystem with the 'residual' stone blocks to be obtained from the quarry whose activities are stated to be terminated in the near future (or from a large number of quarries in the immediate vicinity). OVO: Look-See at History and Nature on the Same Level The top concern in proposal design is to interpret the 'same level' association; that is, to rethink the coexistence of human and natural environments in different contexts. It is aimed to transform the waste stone blocks obtained from the nearby stone quarries into a design gene that establishes the building. It has been suggested that the parts of these natural assets, which have important commercial value, that can be ignored in terms of industry and fall into the waste category, should be cut to reasonable sizes without undergoing a laborious and costly process and evaluated by masonry construction method.

The founding Oghuz tribe, who formed the historical background of Söğüt with its founding story has a belief that every region and tribe that lived in Central Asia had a protective spirit. The Kams chose a particular hill or mountain where the guardian spirits resided as their place, and they built a simple ovo by making a dike with soil and stone to perform rituals/ceremonies there. 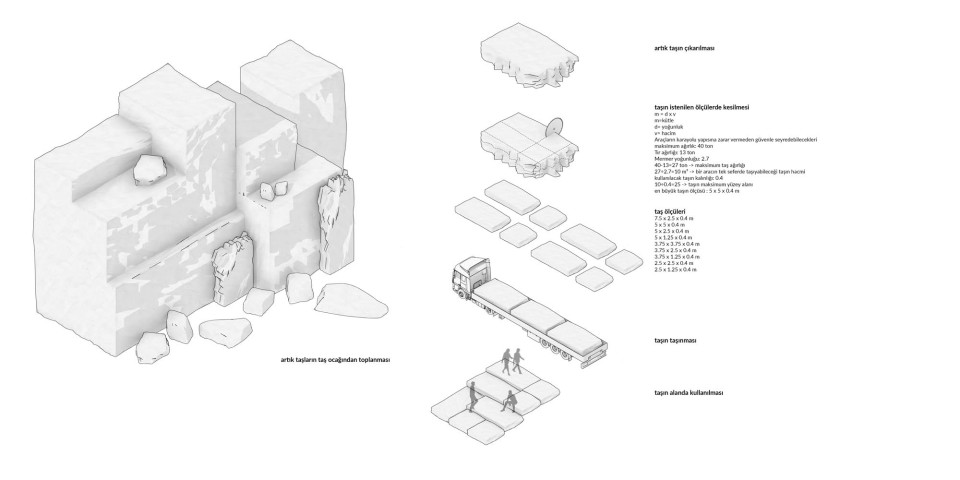 In Shanghai Turkish, the word 'ovo', which means a mound, detachment, outpost, or location consisting of a pile of stones on the side of the road, is of Mongolian origin. Word meaning is heap, mass, pile, mound. The word, which is also in the form of 'oboo' and 'obogo' in Altai Turkish, is explained as a pile of stones dedicated to the mountain spirit. 'Ovo', "a series of piles of stones that passers-by usually put in dangerous areas, a pile of stones where offerings are made, sacrifices are made, and rags are tied; carving the temple is the place where they offer sacrifices to their guardian spirits, where passers-by make vows and the pile around which the passengers turn in prayer during the journey, leaving stones on it and enabling them to continue their journey by taking courage from the holy spirits.” (Eroğlu, Eren Fehmi. [2020]. Obo Kültü ve Muğla Meke Köyü Oboları. Bayterek Uluslararası Akademik Araştırmalar Dergisi. c.3 s.2 ss. 46-73.) This tradition is still observed in different parts of Anatolia in its transformed form.

Speculations arise about the spiritual context of human-nature communication as the monolithic ovos formed by many stones are examined. For instance, ancient ovos have no practical function other than to establish monumentality. It builds the image as it moves away from the human scale and uses the solidity of the material to be majestic. However, there is a plastic and ideational diversity created in social-spiritual life by these structuralities, which turn into objects of commemoration rather than commemoration experience. In this sense, the cultization of ovo heaps and their areas in Anatolia and the fact that they are the scene of ceremonial acts (tying a wish rag, adding stones, etc.) can be given as an example. Considering all these discussions, when it comes to encountering history and nature, stone piles refer to cultural identity, communication and sensitivity to nature, and sustainable construction activities. The restaurant and the multi-purpose hall, which are the two main spaces formed by the piles of stones, are planned at the lower level and try to camouflage by the land. Likewise, they open onto terraces created with stone surfaces and seek relatively sensitive publicness in nature.

The proposed stone heaps are also repeated outside the basement with the basic function suggested in the section where it creates heavyweight, and it produces the landscape experience by pressing directly into the soil. While doing this, it also symbolizes ecological unity by returning to the ground surface where it was plucked, integrating with plants and coves that do not require care. Besides, the design preserves the uninterrupted view experience already encountered at the hill level on the Söğüt road. It proposes a terrace that reinforces the unique course of history and nature. This terrace tries to cover stone piles like natural ground. To preserve the rural calmness of the area, the functions loaded on the building were kept compact, and it was important to establish a relationship between the semi-open space proposals such as viewing, promenade, and activity area and the countryside.

I. The Environmental and Functional Approach
The building and open space functions are thought to respect the geography where it is located, and it is proposed to be positioned on the same level as the hill, which has a 20-meter level difference between its skirts and summit. It is planned to form a terrace facing Söğüt in the northwest and southwest directions, in line with the Söğüt district and the flagpole to be built later.

Access to the open car park is provided via Eskişehir - Bilecik Road (from the east) by car. The parking garage is located at the -9.00 level, which is accessed by a ramp. Also, the multi-purpose hall, semi-open foyer/terrace, and restaurant are accessed via a ramp from the ground-level terrace. The multi-purpose hall has the potential to be used on special days, festivals, invitations, and city events (cinema, theatre, etc.). At the same time, Söğüt turns into a new activity point where you can breathe in the chaos and density of the city in daily use.

A natural stone amphitheater is proposed to reinforce the relationship between the multi-purpose hall and nature on the front façade of the building. This spatial element serves as both an interaction area and a vista for the lounge and cafeteria after the event.

Pedestrian access is provided with the stone amphitheater steps designed considering the level difference. The dynamic attitude of the pedestrian around the building over the stone steps has been continued on the path used to reach the second cafeteria structure located next to the flagpole.

This path represents human interaction with nature. It is shaped by the rhythm of walking, making the inter-space bond fluent. The path is shaped parallel to the slope, yet it is interrupted according to the topography conditions like existing rock fragments merging with the path. Vista points become experienceable with dead-end paths and give the visitor a meeting point with nature. Geography is explored by experiencing it on the trails. These are areas that will enable the re-establishment of the weakened relationship between humans and nature through urbanization. Breathing areas are articulated at appropriate points on the paths for resting/sitting purposes. Specialized experiences on the road have been created with the proposed landscape in these areas.

A vista orientation is suggested for the cafeteria structure that can be reached at the end of the path. A terrace was created at the ground level, where the view can be watched clearly, and access to the lower level is provided with both the stone amphitheater and the building's interior staircase.

II. Material and Structural Decisions
As mentioned above, it has been suggested that the structural solution could be the traditional method of masonry with a reference to ovo. Stone placements are irregular and haphazard, just like in ancient times. The cracks and gaps in the waste stones will be preserved without any repair. The main structural natural stone walls, apart from being just load-bearing, maintain themselves in spatial use.

In the project, it has been proposed to use the leftover stone blocks from the marble quarry located in the northeast of the area, which is planned to be closed, to preserve biodiversity, ensure structural sustainability and emphasize the use of local materials when choosing materials.

When producing raw blocks in quarries, the small, irregularly split blocks produced during sizing and cutting are waste and less valuable pieces. Therefore, it is aimed to use these leftover parts in the main load-bearing walls and the amphitheater by bringing them to certain sizes. The largest piece was calculated according to the maximum weight that a truck can carry on the road, and the dimensions of the other blocks were determined accordingly. These blocks will be combined by compacting 3 to 5 cm of soil on top of each other. 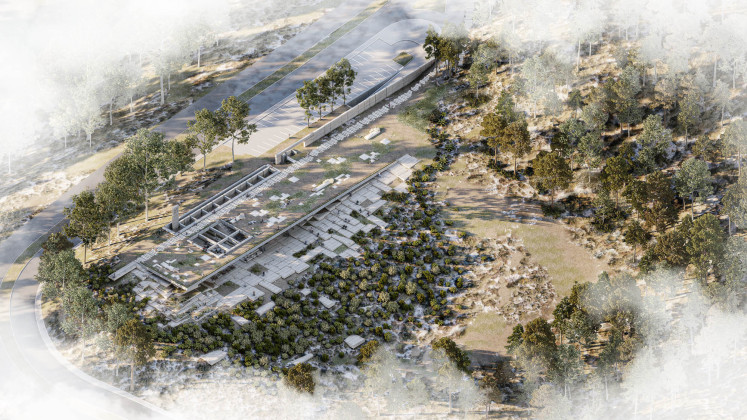 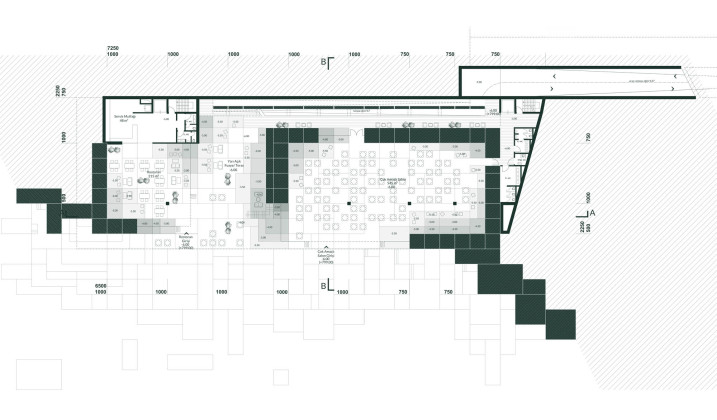 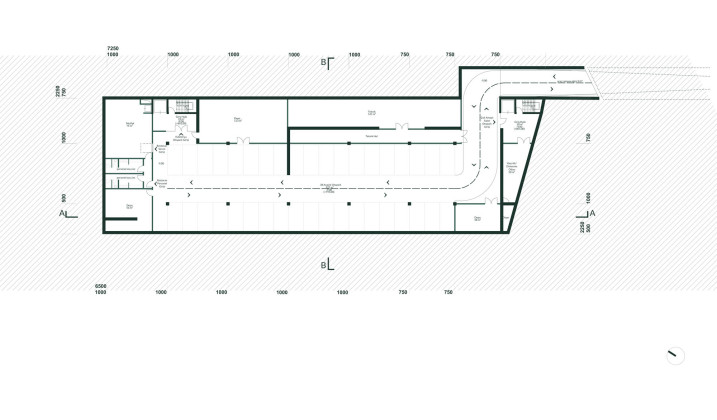 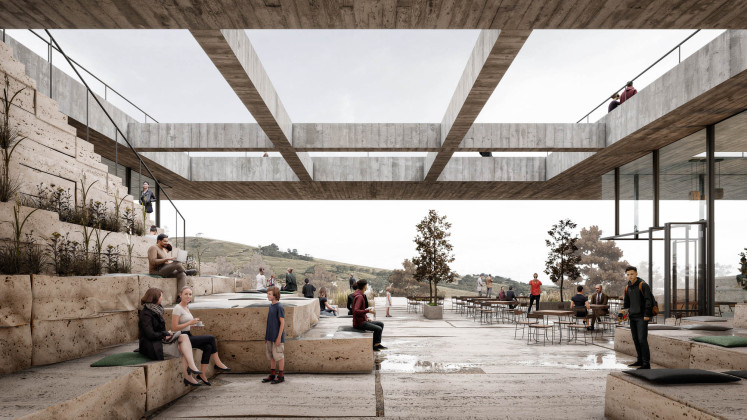