Located in an urban plaza in Madrid, Tandem encourages citizens to claim their public space by co-managing energy use.

What would happen if a public space became energy self-sufficient? What if a public space were to function as a laboratory for citizen energy management? This is the challenge launched from this urban experiment located in the heart of the Malasaña neighborhood in Madrid. Three urban devices equip the gardens of the architect Ribera: an open classroom, a small stage and a point of information-accumulator of energy that allows to equip the devices with an energy of 2KW/hour for all the users of the square. Similarly, the three devices try to interconnect the physical space of the square with a Twitter machine @plaza_tribunal, which controls certain interactions such as changing the lighting color of the square, the publishing of selfies taken with your webcam or leave messages on LED screens.

The main idea of the project is to experiment with how this energy self-sufficiency becomes a trigger for the activation, promotion and co-management (liberalization) of citizen activities in public spaces. The solar energy accumulated in the (solar) storage systems of the devices are not only designed for individual use to charge the mobile phone or computer but rather to explore new collective uses such as the projection of open air cinema or a small concert associated with the stage or as an energy support for a storyteller in the open classroom. Energy self-sufficiency thus makes it possible for citizens' initiatives that have hitherto been excluded from free energy use in the street and square to reclaim public space. 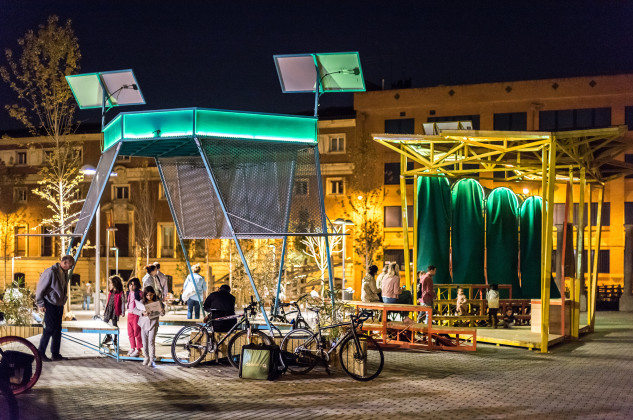 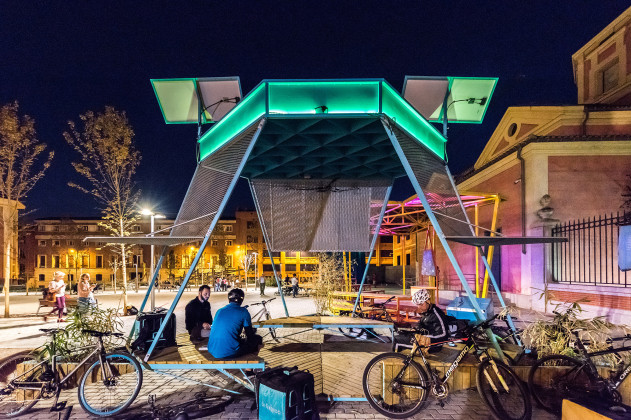 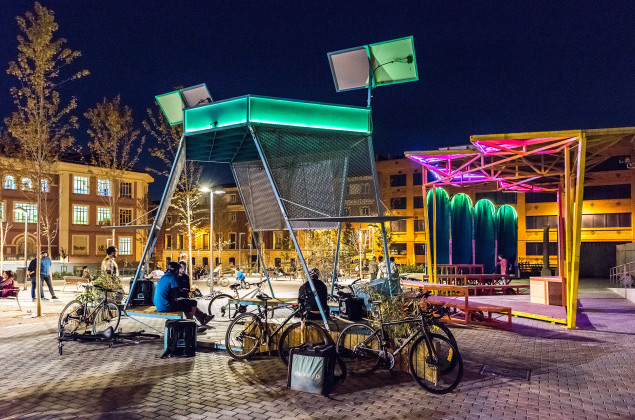 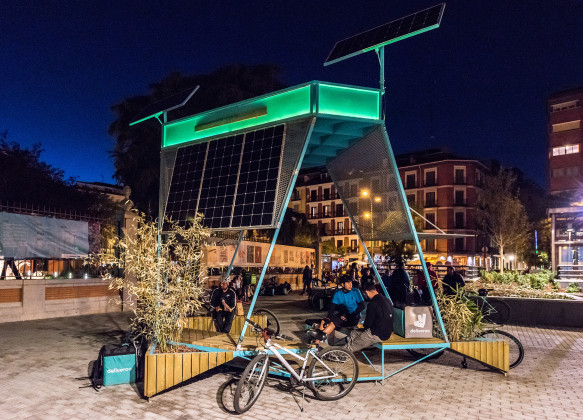 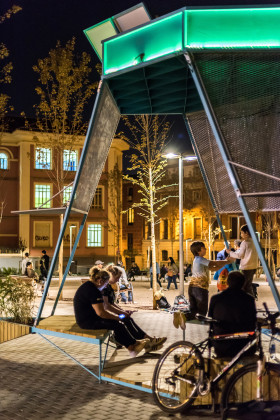 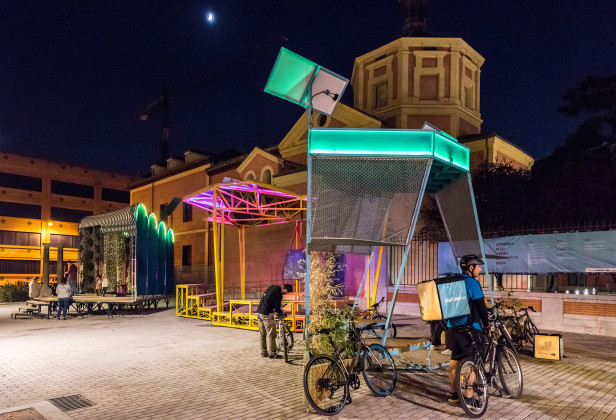 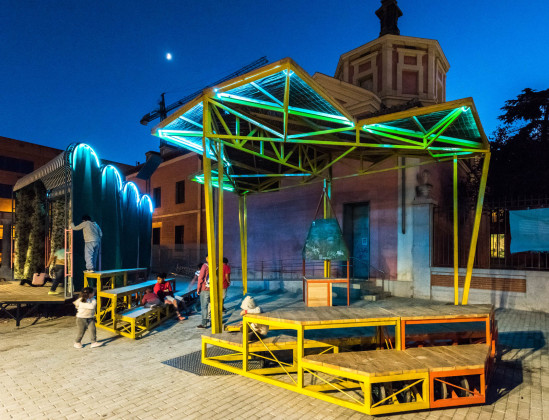 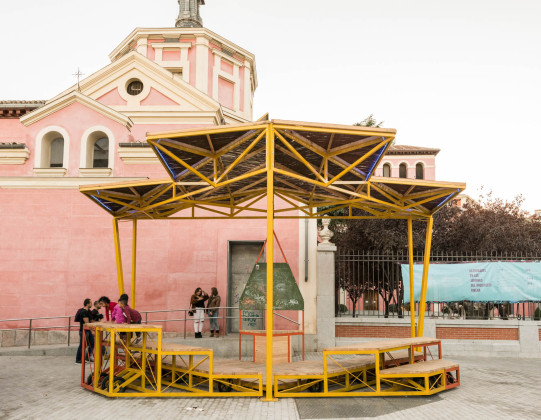 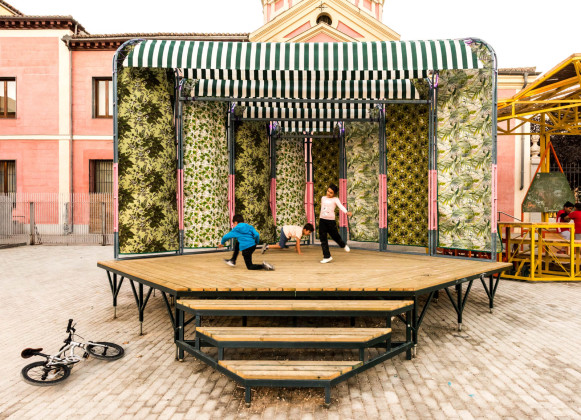 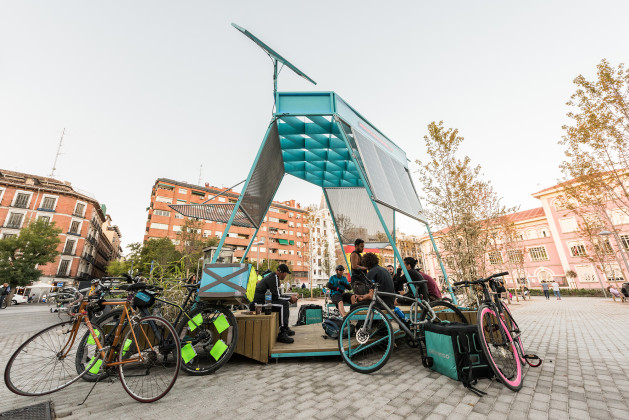 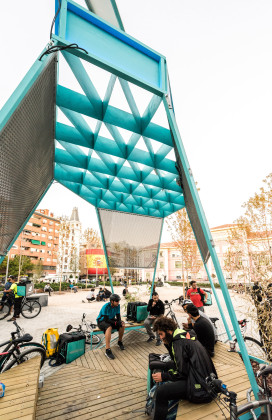 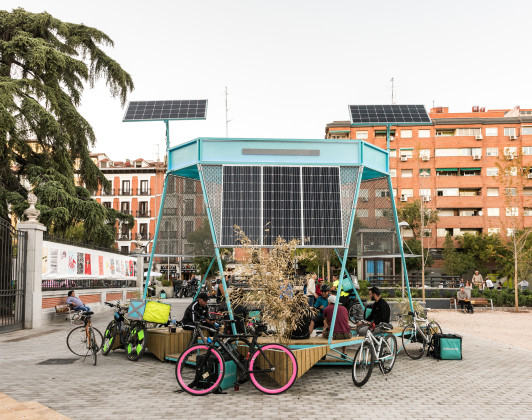 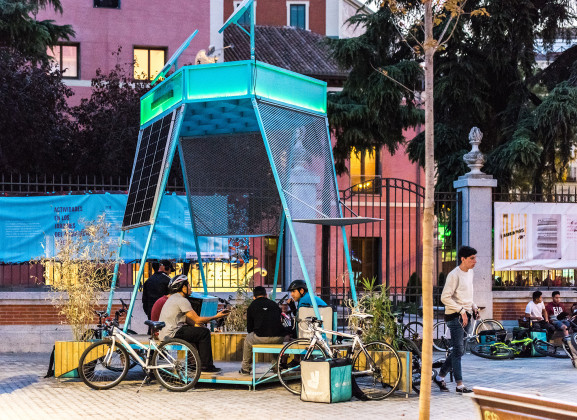 A second important question regarding energy and public space has to do with the need for an urban pedagogy that brings us closer to a responsible and shared consumption taking into account the finite character derived from solar energy accumulator batteries.

The third issue gravitates around the possibility of generating a calendar of possible activities that can include the formal and informal neighborhood associations, and of non-organized citizenship. In that case the "eventual" can become "habitual" and neither a state of exception nor a way of appropriation of the public space always linked to institutions. Access to energy can be a first step in the process of appropriation of public space by a large number of citizen initiatives, experimenting towards a hybrid model of management between the City Council and the neighborhood, with new modes of co-management and co-use of public space.

TXP is a multidisciplinary collective of architects, designers and artists based in Madrid. TXP proposes new ways of producing the city by enabling new channels, tools, methodologies and frameworks for urban innovation involving the active participation of citizens. TXP develops its main activity from collaborative practices by proposing citizen coproduction processes where it is co-diagnosed, co-designed, collectively constructed and defined citizen management models in a collective manner. TXP is also part of different networks of collectives and agents that cooperate and share knowledge, experiences and resources. (GRRR Group on resource reuse, COOP 57, etc.)