Searching for new ways to integrate a parking house into city life as an attractive public space, JAJA Architects’ project rethinks the whole concept by taking hints from the city itself

The new parking house is situated in Århusgadekvarteret, which is the first phase of a major development plan for Nordhavn. The neighbourhood is currently under development and will in the future host a mix of new and existing buildings. Today, the area is known as the Red Neighbourhood because of the historical and characteristic red brick harbour buildings. The future development will build upon this historical trait and merge existing characteristics into new interpretations. 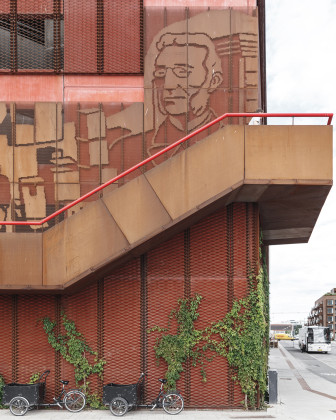 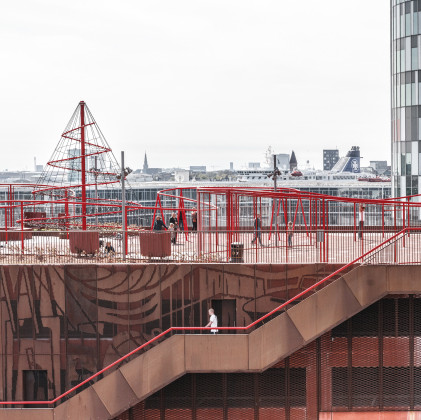 The Project
The starting point for the competition project was a conventional parking house structure. The task was to create an attractive green façade and a concept that would encourage people to use the rooftop.

Instead of concealing the parking structure, the architects proposed a concept that enhances the beauty of the structural grid while breaking up the scale of the massive façade. A system of plant boxes is placed in a rhythm relating to the grid, which introduces a new scale while also distributing the greenery across the entire façade. The grid of plant boxes on the facade is then penetrated by two large public stairs, which have a continuous railing that becomes a fantastic playground on the rooftop. From being a mere railing it transforms to becoming swings, ball cages, jungle gyms and more. From street level, the railing literally takes the visitors by the hand; invites them on a trip to the rooftop landscape and amazing view of the Copenhagen Harbour.

This project is based on a standard, pre-defined concrete structure. As a second layer, the proposal becomes the active filter on top of a generic, multi level car park. The structure has a rational and industrial crudeness, which suits the area’s spirit and history; however, the traditional concrete parking structure can appear cold and hard. As a natural continuation of the area’s red brick identity, a red colouring of the concrete structure is proposed. With this simple measure, the grey frame is transformed into a unique building structure, which radiates warmth and intimacy through its materiality and surface, in harmony with the surroundings that are dominated by red roof tiles and bricks. 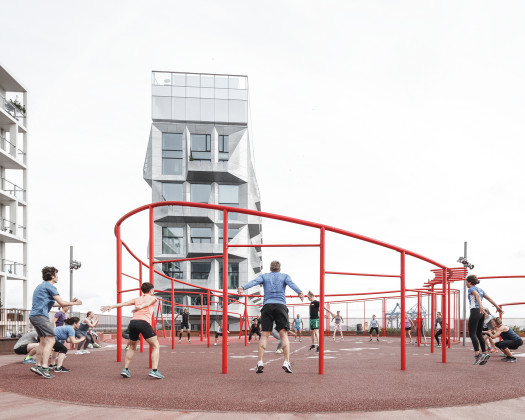 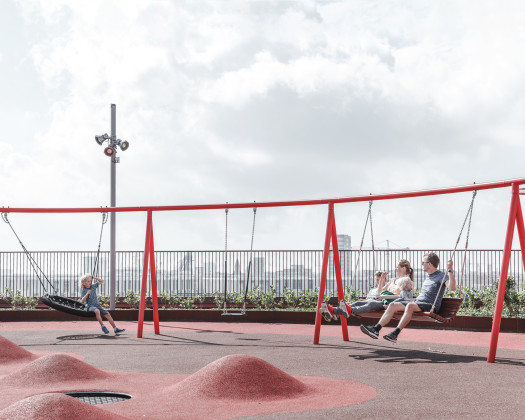 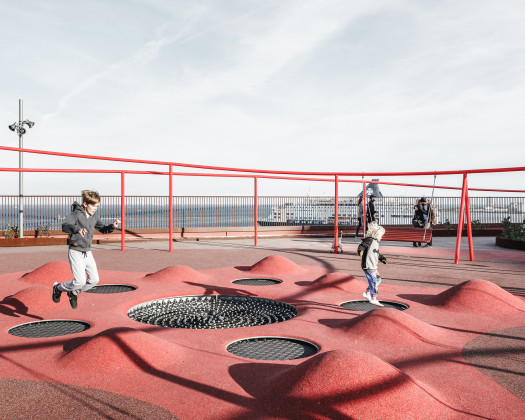 The Green Façade
The building will be a large volume in a compact, urban setting, and because of its proximity to the surrounding urban spaces, the parking house will predominately be seen from close-up. To provide scale to the large building, the office propose planted façades where a green structure interacts with the building behind.

The green façade is made up of a plant “shelving system”, which emphasises the parking structure and interacts with the rhythm of columns behind. Plant boxes introduce scale and depth, and provide rhythm to the façade. The placement of plant boxes follows the grid of the parking house, and there is a box placed in a staggered rhythm for every second column, in the full height of the building. The system of plant boxes brings depth and dynamic to the façade, while also matching the neighbouring buildings’ proportions and detailing. The plant structure covers all four façades, and provides coherence and identity to the whole building. The green façade is planned into a time perspective, to provide for the quickest possible plant growth against the tinted concrete. The expression of the façades is based on an interaction between structure and nature, the structural vs. the organic, and provides an exciting interdependence between the two. 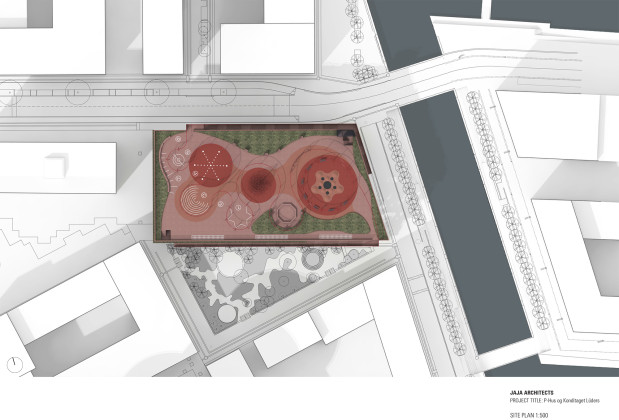 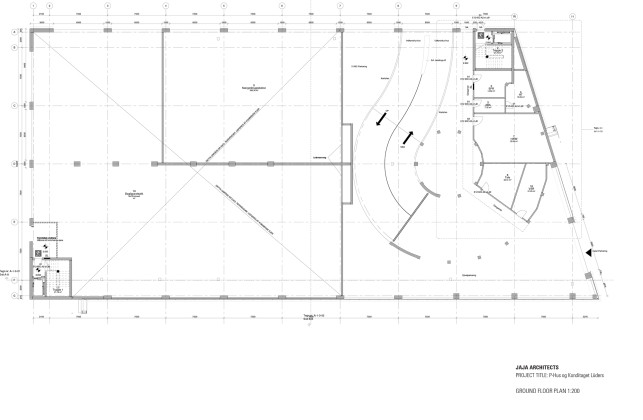 The Staircase and the Roof
The basic principle of an active parking house is the idea of an accessible and recreational roof offered to local inhabitants and visitors alike. Visibility and accessibility are therefore essential when creating a living roof. A staircase towards the open square provides a diagonal connection between street- and roof level, and invites people to ascend along the façade. The course of the staircase follows the building’s structural rhythm, and each landing provides a view across the surrounding urban spaces and at the top, a view to the roofs of Copenhagen.

The staircase has references to Centre Pompidou, where the movement along the façade is an experience in itself. Along the back wall of the staircase, JaJa architects worked with RAMA Studio to create a graphical frieze, which, in an abstract, figurative form conveys the history of the area. The narrative can be seen from street level, and followed more closely when the visitor ascends along the staircase. Along here, we also establish alternative access points to the parking levels. The frieze tells a story of past and future, and becomes a modern tale of the area’s industrial history and its future as Copenhagen’s new development by the harbour. The two flights of stairs on the Northern and Southern façades stand out as vertical passages through the greenery, and clearly mark the connection between street level and the active roof.

The Red Thread
The red thread is a physical guide through the parking structure’s public spaces, which leads the visitor from street level, where the guide is introduced as a handrail on the staircase. As a sculptural guide it almost literally takes the visitor by the hand, and leads along the stairs to the top and through the activity landscape on the roof. Here, it becomes a sculpture and offers experiences, resting spaces, play areas and spatial diversity. Activities along the red thread are traditional such as swings, climbing sculptures etc., but also more architectural elements such as fencing and plants, which emphasises or establishes spaces while providing shelter from the weather. The elevated activity sculpture above the roof provides great flexibility, and makes the exciting activities visible from street level. The sculpture’s journey across the roof continues uninterrupted, before leading back along the second staircase towards the street. Combined the stairs through the green façade and the active roof make up a living, urban landscape that invites for both rest, fun and excitement.

As such the structure becomes a red thread through the project, and connects the façade, the stairs and the activities on the roof as one single element. Copenhagen’s new parking house will be a social meeting ground and an active part of its local environment – as an urban bonus for locals, athletes and visitors alike. JAJA means Yes Yes! It represents their approach to architecture, which is not about a defined architectural style but rather an optimistic curiosity that explores all the possibilities that architecture can be. JAJA is involved in several projects spanning from large urban plans to small buildings. Their approach is based on all projects having several needs, demands, scopes, limitations and potentials. Instead of separating parameters in a project, they strive to find a solution that combined will create something meaningful for the individual while contributing to the community.