105 Collective Housing project by Guinée * Potin Architectes, is located in the Jaguère district of Rezé, France.

The challenges, both urban, architectural and landscaped, of block 5 of the Jaguère eco-neighborhood are major; it is a question of contributing to the writing of the identity of a new district of Rezé, rich in a geographical location and strategic landscape.

Block 5 is a transitional space, both in its geography, the topography of the place and in its role in the landscape. Its location in the rural countryside and the new urbanized areas offers it a major role in the integration of the urban project into the wider landscape.

It is a hamlet parcel through which one passes from the urban to the large landscape by the notions of neighborhood life, private gardens, pedestrian paths, common spaces. As an extension of the work of fine integration of constructions in the topography, vehicle access in the block will be limited to reinforce the concept of "undercover park" and accompany the walker towards the large landscape. The surroundings of the buildings become spaces for crossing, meeting between locals and visitors. 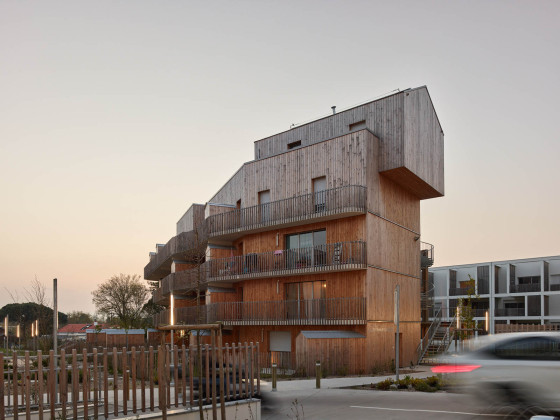 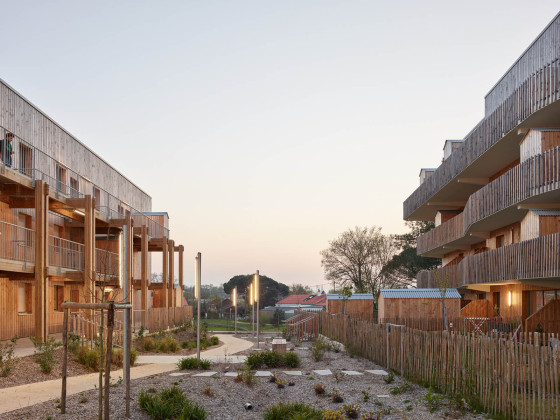 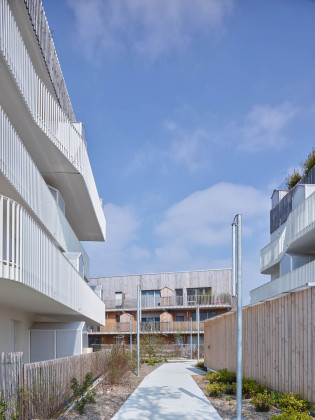 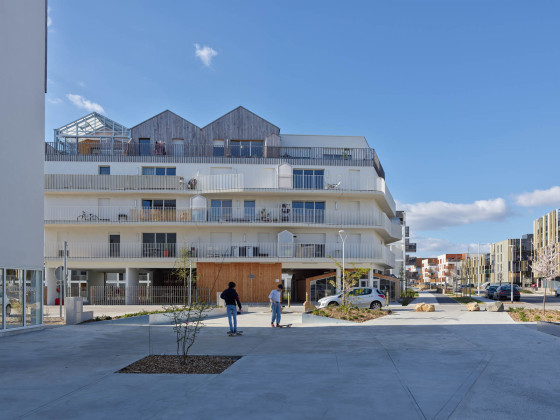 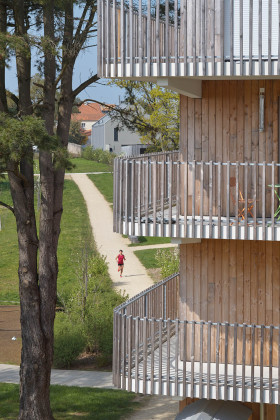 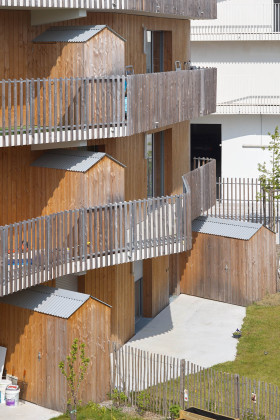 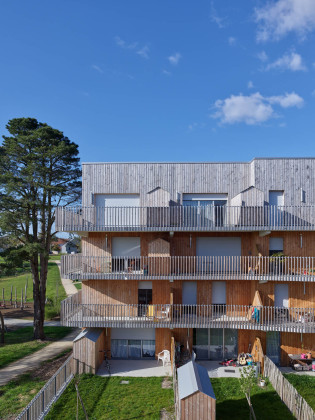 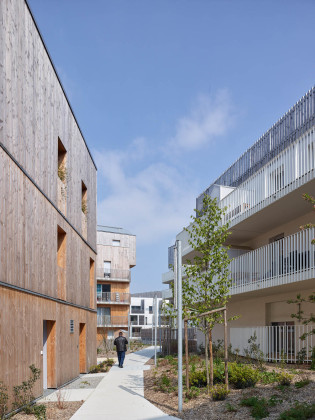 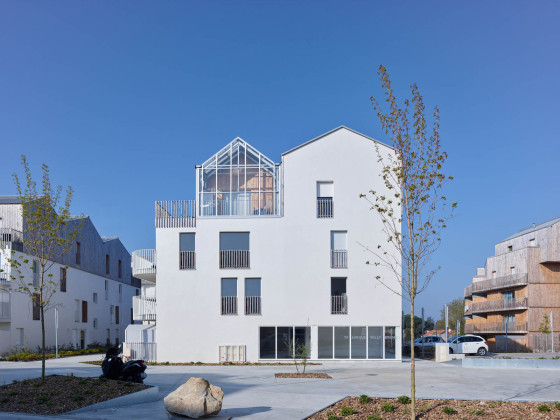 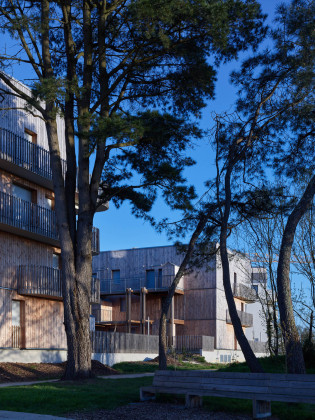 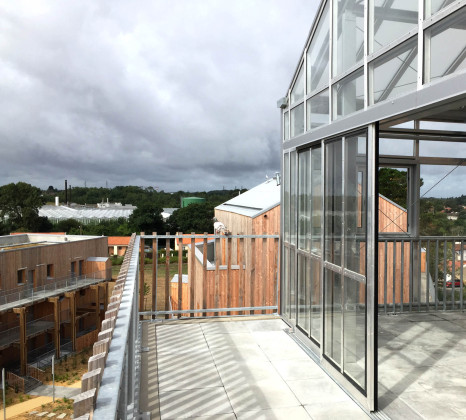 The establishment of the 6 constructions with specific characteristics (thickness, parking management, orientation, relationship to the surrounding building, treatment of the immediate surroundings ...) and an ambitious objective in terms of density, our bias was as follows: Respect the principles of alignment and continuity built in the ground floor, while offering a rhythmic sequence of varied templates, from second floor on the Park side to third floor + penthouse on the Place de la Jaguère side. This subtle variation of sizes is accompanied by a volumetric composition alternating linear volumes with more compact volumes, so as to "hybridize" the programs without there being an immediate perception between, free accession, affordable, or social housing.

The porosity proposed by these rhythmic sequences of templates and alternating volumes, are intended on the Place de la Jaguère, to mark the crossings of the islet, from east to west.

This porosity is a continuation of the urban planner's plan where the islets are arranged in a "comb" from west to east. From north to south, generous breaks between the constructions offer visual sequences and an alternative pedestrian and bicycle walk. 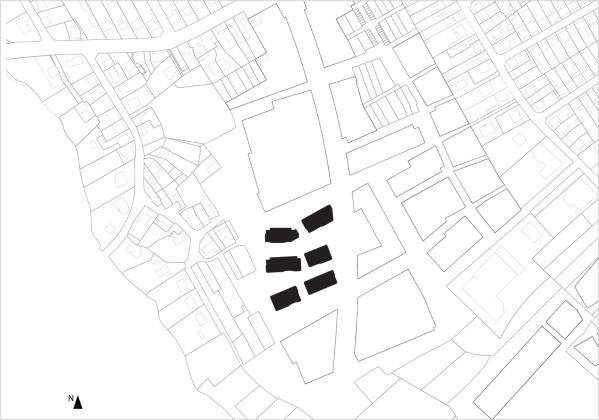 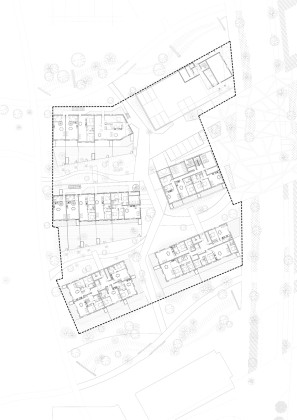 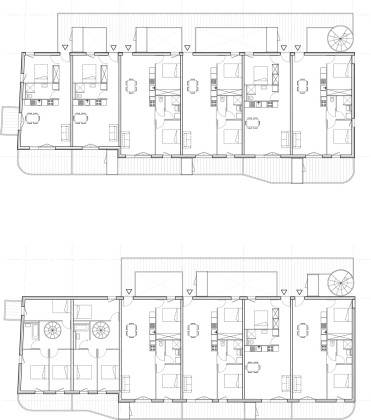 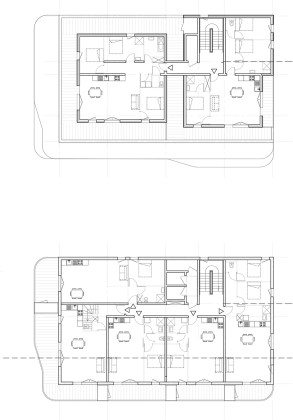 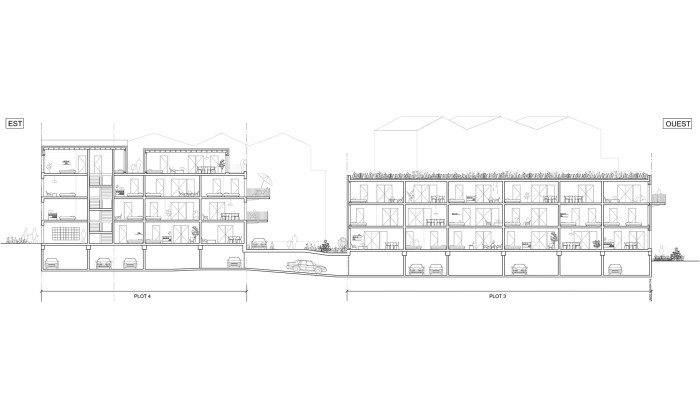 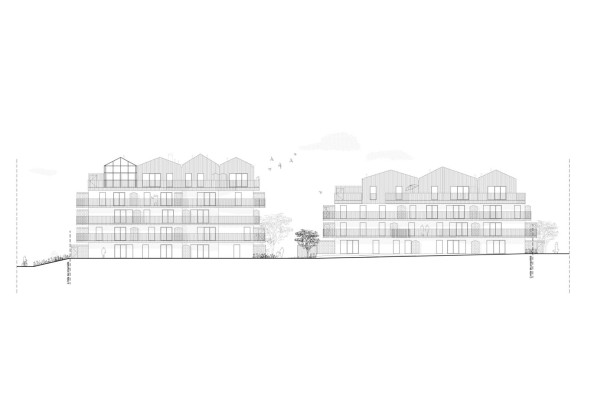 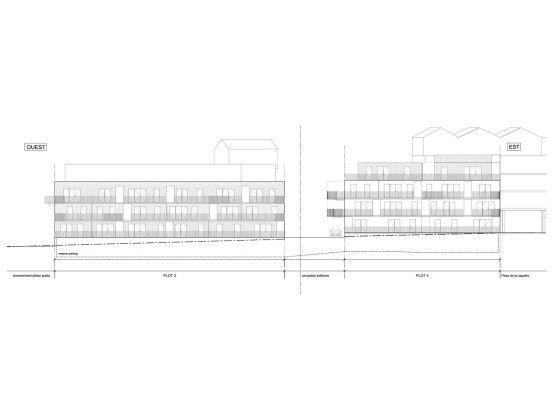 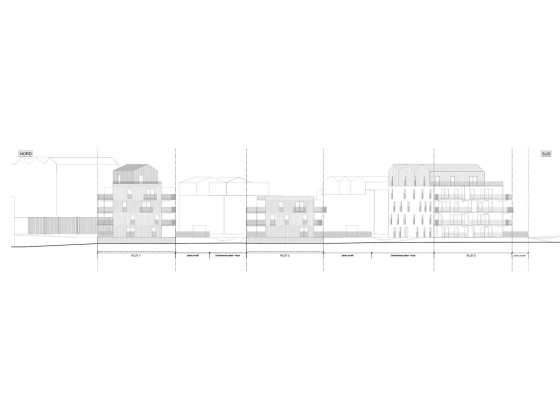 The buildings are wrapped in continuous balconies, with white lacquered metal railings. They undulate slightly and are punctuated by private exterior storage units punctuating the façades and creating a chromatic vibration. The buildings are punctuated in the attic by winter gardens, and on the ground floor by the facade of the activity room or by a generous hall / lounge on the Place. The winter gardens are of the "greenhouses" type, composed of glass elements and light frameworks, echoing the surrounding market garden landscape.

This treatment of the facades thus offers an alternation of materials and provides a chromatic palette and textures, generating a coherent variety of material from public space and the surrounding walking paths.