As part of the Venice Architecture Biennale’s main exhibition OOZE architects & Marjetica Potrč present their project Future Island, researching the past relation between climate and its living beings and the evolution of earth with 15 stories.

Future Island is a public art project under construction as part of the main landscape at the new Albano Campus of Stockholm University and "Future Island in Venice: Time of Stone" is being exhibited in 17th International Architecture Exhibition - La Biennale di Venezia curated by Hashim Sarkis. Under this year's title 'How will we live together?', the contribution is in the section of "As One Planet" in the Giardini Central Pavilion. "Future Island in Venice: Time of Stone" consists of a heated rock prototype that travelled from the actual building site of Future Island, architectural drawings of the project and 15 stories of adaptation.

The current discourse around climate change focuses on mitigation as a means to preserve our way of life, but most of natural history has been a history of adaptation to, rather than a stubborn avoidance of, inevitable change. While it is very necessary to reduce greenhouse gases in order to avoid planetary catastrophe, the simple truth is that we will also need to learn from nature to adapt to a changing environment.

Earth has already witnessed a number of extreme climate crises, with all the corresponding mass extinctions and explosions of life that followed. This 4,543-billion-year logarithmic timeline—increasing detail towards the present—features earth's shifting temperature as a protagonist, alternating between icehouses and greenhouses and offering habitats for evolving forms of life. Fifteen episodes illustrate how evolving life forms have not only continuously adapted to changing environments but became themselves the architects of more suitable habitats in order to evolve further. In the distant past, drastic temperature changes (+15˚C to -5˚C compared to the current average) were caused by either external or internal interferences with Earth’s ecosystems, such as asteroids or volcanism.

In the recent past, human beings were the first species that was able to progressively increase their collective influence on Earth’s systems in such a way that the consequences are now almost comparable to an asteroid impact. Only 2.5 million years ago, humans entered the scene at exactly the moment when greenhouse Earth had cooled down to a relative flatline global average temperature around 14˚C degrees. Minor fluctuations have still pulled levers behind the curtains of cultural development, drowning empires and exposing the fallacy in architecture's sense of permanence. For several millennia, humans have adapted to climate changes and in turn, caused temperatures to waver further. Recognising that the temperature line is likely to climb much higher within this century, Future Island is a landscape intervention in Stockholm, Sweden that simulates global warming conditions by artificially heating half of the island +5˚C: a conversation piece that observes how flora, fauna and humans adapt to warmer temperatures. It challenges us to redefine adaptation not as a mere reaction but as an opening up of possibilities.

Future Island in Venice consists of two parts:
The Experience: One of the stones from Future Island, an original prototype of a heated rock, has been transported from Sweden to Venice and installed in the exhibition. It is heated by a solar collector on the roof of the Central Pavilion in the Giardini.
The Wall: Architectural and process drawings explore past and future stories of adaptation, questioning and contemplating the obstinate tendency of our global society and architecture to focus on mitigating climate change in order to preserve an artificial way of life, rather than adapting to it. It can be viewed in detail via this link. 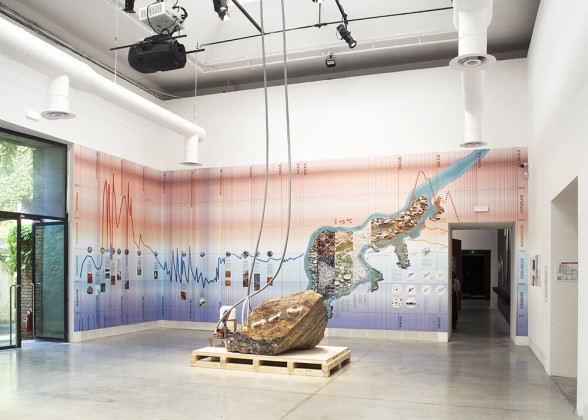 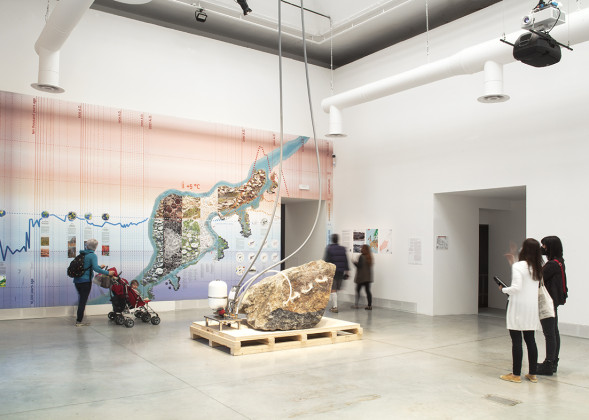 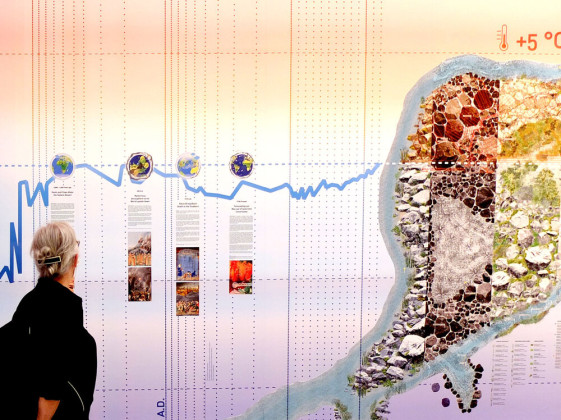 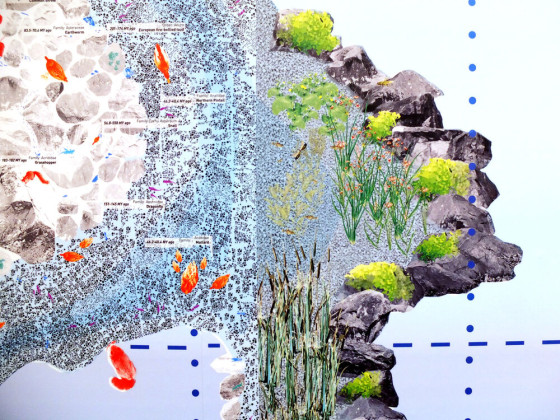 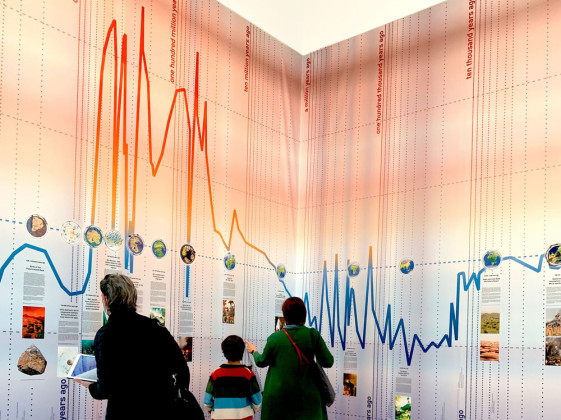 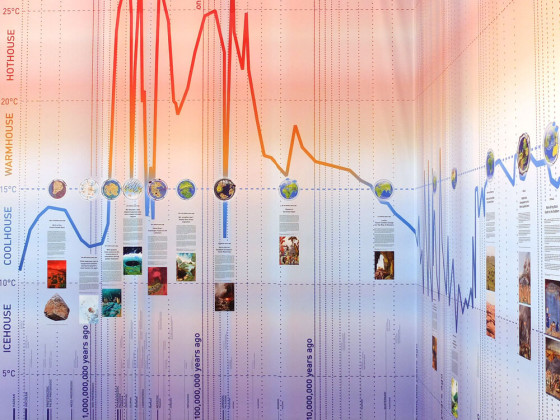 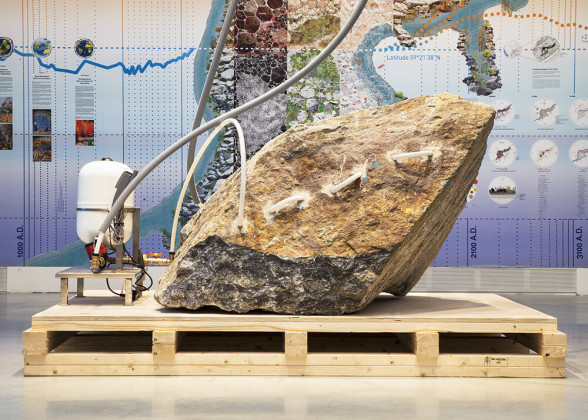 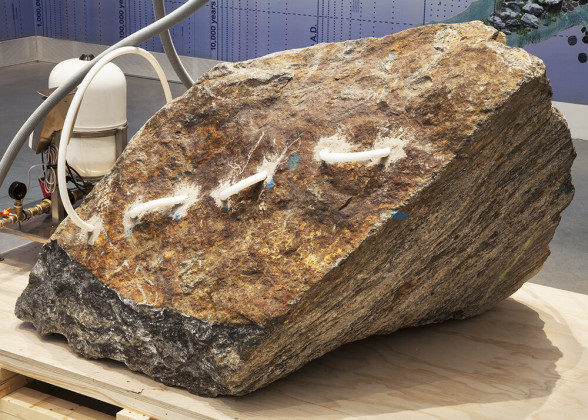 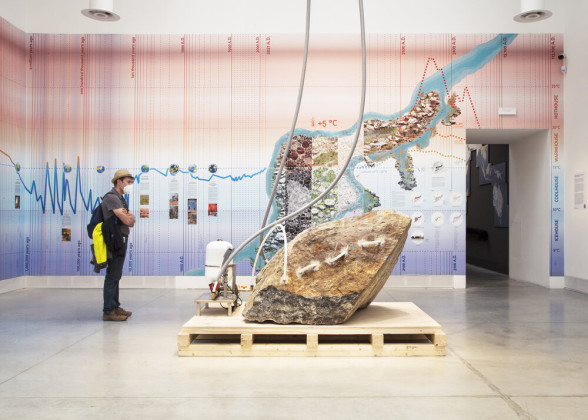 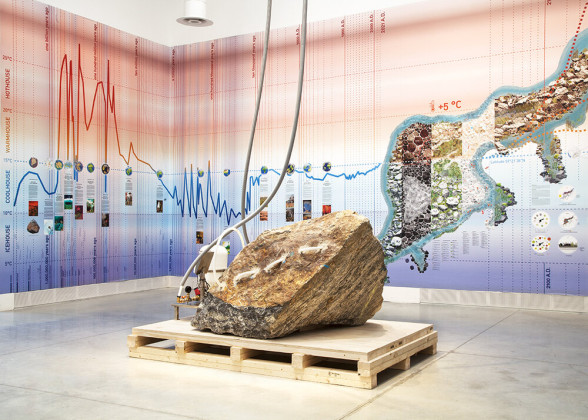 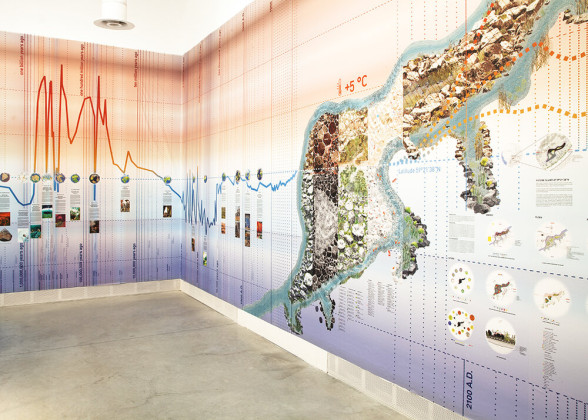 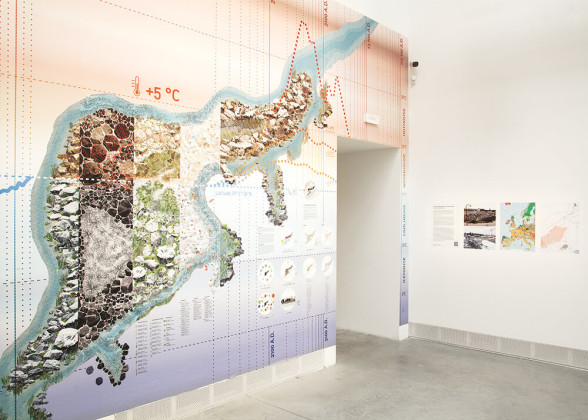 Heated Rock Prototype
The heated rock prototype is an installation combining a rock taken from the Future Island stone field and a heating system connected to a solar panel on the roof of the Central International Pavilion in Giardini. The rock travelled from Sweden to meet the visitors of the biennale.

Touching the rock creates a communal experience. It is both literal and symbolic. It is the elemental component of Future Island that creates an immediate physical experience of global warming and a physical link to the project in construction. Just like the intention of Future Island project, the installation engages the public in a discussion on climate change. The hot rock is a conversation piece including not only the visitors and the authors, but also all the actors, commissioners and funders which have been part of the journey so far.

Stories of Adaptation
Adaptation is generally seen as a rather passive trait, as a gradual evolution through millions of years. But by exploring the details of the symbiotic relationship of all Earth’s systems it becomes clear that adaption is at least just as much a willful act of decision making and design. Also, other live forms have not only occupied territories but actively shaped the spaces and the environments around them. Architecture, usually seen as a quintessential human activity, is a pertinent act of adaptation. It had and still has the function of providing protection and shelter from the elements. However, over time architecture has mushroomed into a demonstration of power, status and permanence disconnected from needs and inevitably at the expense of other species, and as such actively contributing to the current crisis.

With this installation, consisting of Earth’s temperature timeline with fifteen accompanying stories and a prototype, one heated rock of the project Future Island (Sweden), we challenge architecture’s static state of permanence. We hope that the fifteen glimpses into Earth’s history will spark some imagination and positive takeaway for our future. Each episode shows that there is always a positive outcome, at least for some species, be it dinosaurs, mammals, humans, bacteria or fungi. Each episode demonstrates that challenges and crises are a trigger for an evolutionary leap. Architecture, in building a skin around us to house our families and activities, sits at the interface with the changing world to which adaptation is the key.

More info can be found on the Future Island website.