Remembered Time
A breathing stop between the gaps of memory.
History that transcends geography is passing us by. Many have benefited from this water. Many civilizations were established here, many languages were spoken. Sound of the place is quite crowded. This water brought lots of things from neighboring countries, carrying from here to there as well.
Are there any traces?
This water divides the city in two. The old city faces the new. The past inevitably overlaps with the present. Remembered time coincides with the time to remember. This is a rare present where the irreversible past and the future are connected, and they shoulder each other as they connect.
This is a place for River Orontes to breathe.
Orontes will overflow, leave what it carries. They will come alive and arise. What will come from Orontes?
Kismet...
Whatever comes is welcome.

Orontes’ Journey and Mills
Whatever the City Brings...
We are on a threshold. The old city and the new city touch each other. Passing River Orontes strengthens the threshold effect. Thresholds have a lot of potential as they contain elements that are not on either side. The old city, the old bazaar, the old texture exist with their own dynamics, and so as the new city. Instead of trying to describe this interaction, we prefer to establish the infrastructure in which they can exist and leave the rest to this texture that shows the threshold character.

We are constructing a memory table that is fed by the natural flow of Orontes by the water and by the city with the ordinary flow of daily life, the infrastructure of which is created and the rest is left to this rich texture that shows the ecotone character. The trans-geographical ancient Orontes is unqualified due to various political conjectural situations and lack of control. But, the city's natural infrastructure, valleys, mountains and channels leading to Orontes from its side streets provide a very suitable infrastructure to make the river lively and flowing again.

01 Current Status
The high concrete walls along Orontes on the current coastline completely cut off the relationship of the inhabitants with water, and the undefined urban spaces that formed cause the area to be a "passing" line rather than a "stopping" space.

02 Withdrawal
In order to connect the water with the citizens, the shoreline is withdrawn towards the Ulu Mosque Square in the first stage, and the ground is prepared for water organizations and various landscape design.

03 Shaping According to City
The line has been rearranged according to areas such as eating and drinking areas, commercial areas, Ulu Mosque, Museum and Archeopark where the human density is high, and it has been made to meet the needs by narrowing and expanding.

04 Recommended Status
Public spaces where the citizens can come into contact with the water have been designed so as not to go beyond the borders of the Orontes River, and gene pool sets have been created that will shape the landscape character with the periodic movements of the water.

River Orontes has an exciting journey that starts from the Humus Lake. It passes through various geographies and is fed by many rivers and comes to Antakya. Its folding journey somehow is taken in restraint as son as it meets civilization. We let it flow through the concrete channels without touching us, we go over it, and its enough. But water carries civilization. Water holds a treasure beyond geographies: the seed. The seeds that the river carries from all the geographies it passes –all the way from Lebanon to Syria-, offer a trans-geographical opportunity.

The relationship between River Orontes and Antakya is extremely battered. The water, which has carried civilization for hundreds of years, is stagnant and stinking. The refore, we see the issue not just as a project area with defined boundaries, but as reorganizing the water. Primarily, we prefer to make the water flowing and healthy, and then we prefer to rely on the seeds given by the river instead of a designed landscape. This water has carried seeds, culture, language and civilization for hundreds of years. At this point, we set up the necessary systems and withdraw. There is no harm in the overflow of Orontes, we created our gene pools for the seeds it will leave when it overflows. We see the river’s overflow as a blessing. We give it an opportunity to let go of what it has carried for 571 km.

The Journey of Orontes Thanks to Orontes, it is an ethnic and unique geography woven with all the people, all religions and all languages spoken in this land.

After this journey full of history and culture, the design space works as an Open Air Orontes Civilizations Exhibition. The mill-inscriptions located in the area tell the history of Orontes written in ethnic alphabets. While telling the history of the river, it also carries its water to the city level, and brings its seeds back to the lands of Antakya.

The journey begins with the Archeopark. According to the opinions of various experts, it is highly probable that the ruins of shops associated with the Roman period ancient port were found under the foundation of the destroyed Vakıf Office block . The story of Orontes is told in Latin on the Mill-Inscription that is placed on this area. In other mills that follow, this story welcomes visitors in Armenian, Greek, Arabic, Persian, Ottoman and Turkish languages.

This journey, enriched by the gene pools where the seeds germinated, and the waterways up to the upper levels, ends with the Underground Museum - Orontes Civilizations Exhibition, which is connected uninterruptedly by making use of the level difference.

This is a place for Orontes to breathe. So that what he brought from the land can be gifted here again.

Organızatıon of Water
A pattern that exists between Mount Habib Neccar and River Orontes. Those who know 40 years ago remember that they were able to go down to the river shore, the clean water, the waterway systems coming from the mountains and leading to the river from their side streets.

The organization of water contains two cyclical scenarios. The first is an action plan if the gates of Hama in Syria are kept closed as they are now. Due to the city's character as a port city starting from the Ancient Roman period, its water infrastructure is qualified but unusable. Although this infrastructure is still in place, it is possible to harvest a significant amount of water in the city by improving it further. In the first case, our suggestion is to make Orontes flow and live within the borders of Antakya by harvesting water with different techniques on the streets of different sizes.

This water divides the city in two. The old city faces the new. Remembered time coincides with the time to remember.

When the water that descends with the melting of snow in the mountain zone at the upper levels of the design area passes into the city, the waste waters of the city (carpet waters washed on the streets, water from the front of the doors, residual water from the irrigation of the gardens, etc.) and rain water together with permeable hard floors and bioswale, will all reach the zone. At these stages, the water is brought to the design area by the slope of the land itself and the permeable hard ground - the green area - with perforated pipes, it is filtered in the design area and joins River Orontes. The water mills in the design area create the pre-vegetation scenario by removing the seeds accumulated in the mountain, valley and plain ecosystems to the upper elevations.

Floods in the Orontes are not caused by natural conditions. Floods are not caused by excessive rain and snow, but by water coming from the opening of the Hama hatches due to excessive rain and snow. The reclamation in the project area has been withdrawn while maintaining the upper level. In this way, sets that work as gene pools where the water will rise in the flood have been designed. The seeds that come with the flood are another element that contributes to the pre-planting after the water has receded.

The advanced scenario in the organization of water covers the situation when the cyclical situation changes and the doors of Hama are opened. In this case, Orontes acquires the nature of a flowing and clean water in its natural state. All the water made at the city scale and stored through biological filtration is used this time for irrigation of the city's public spaces as much as possible. Parks and gardens throughout Antakya, mosque courtyards, etc. The city's public water needs are met by the harvested water stored in the project area. 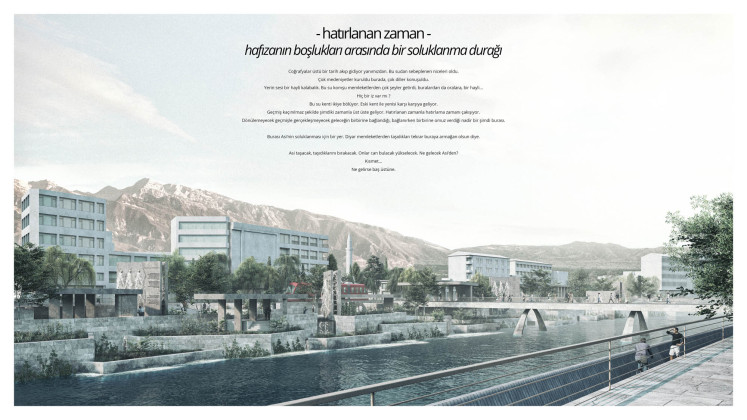 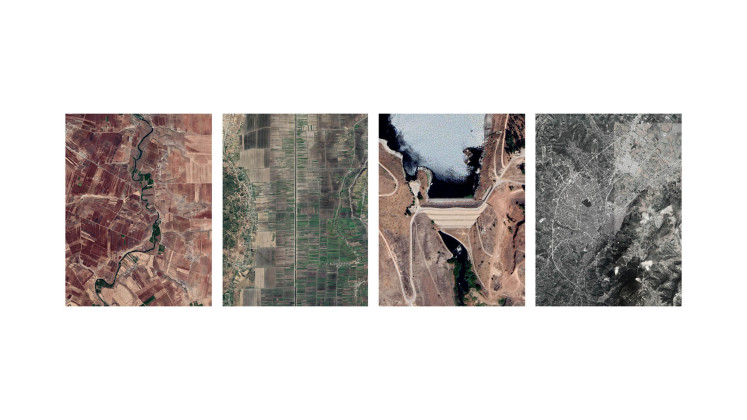 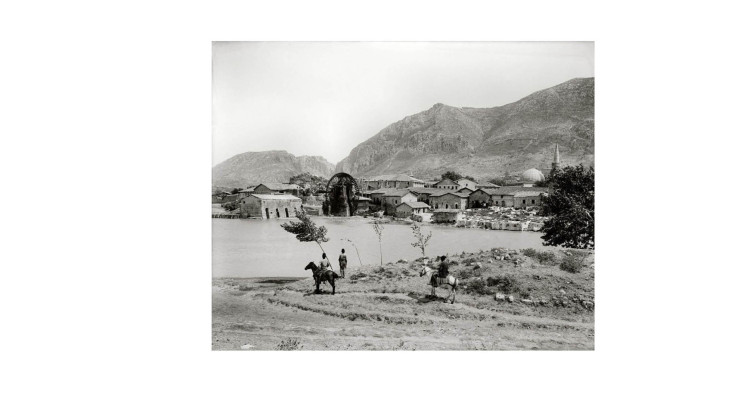 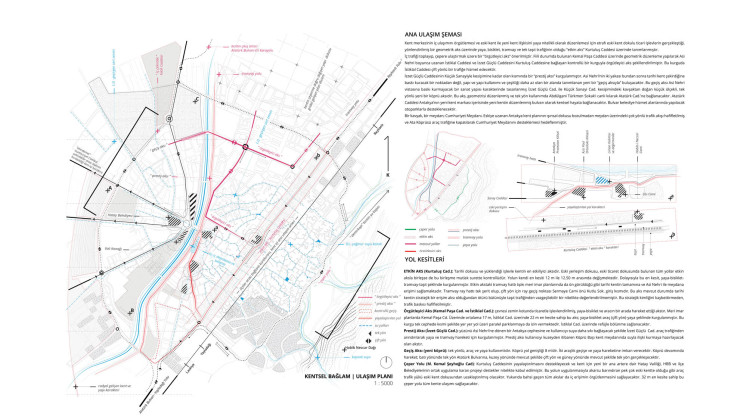 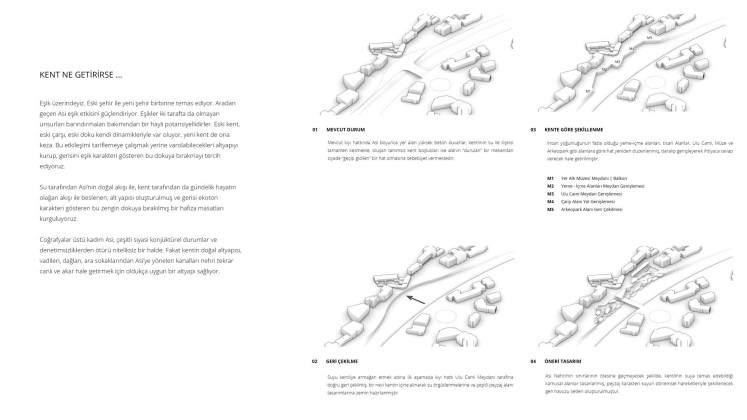 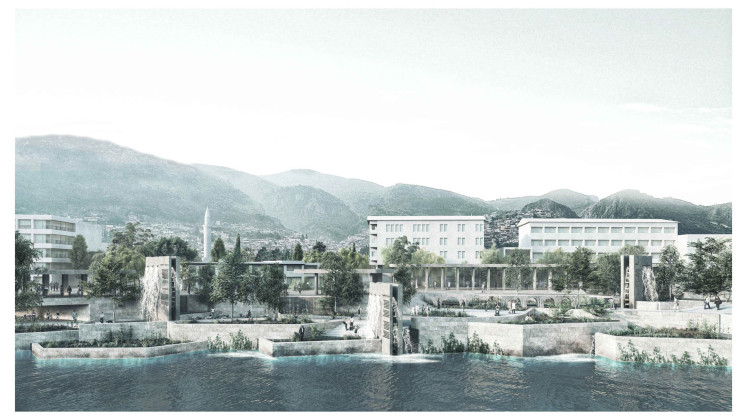 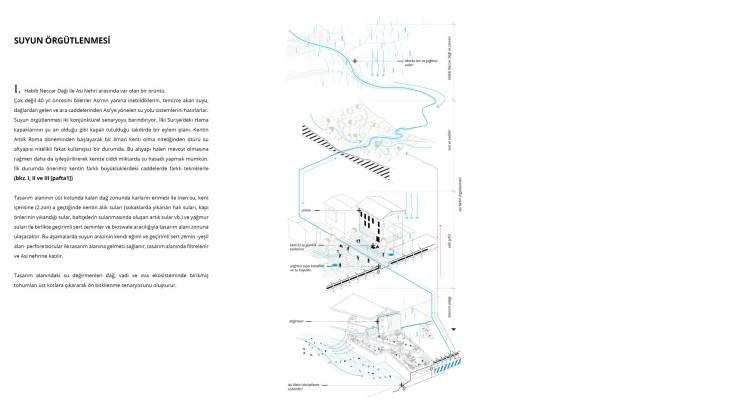 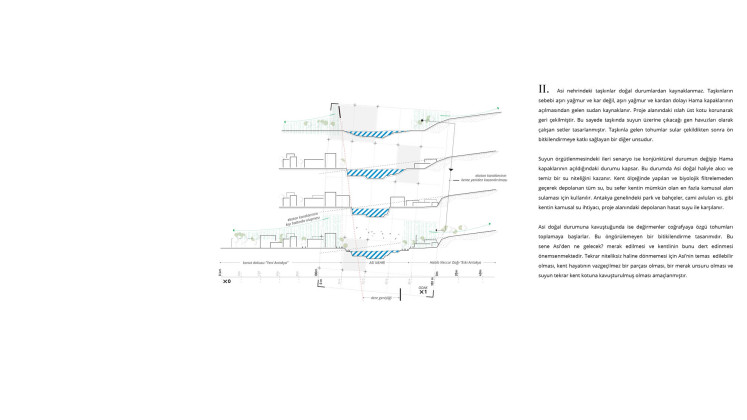 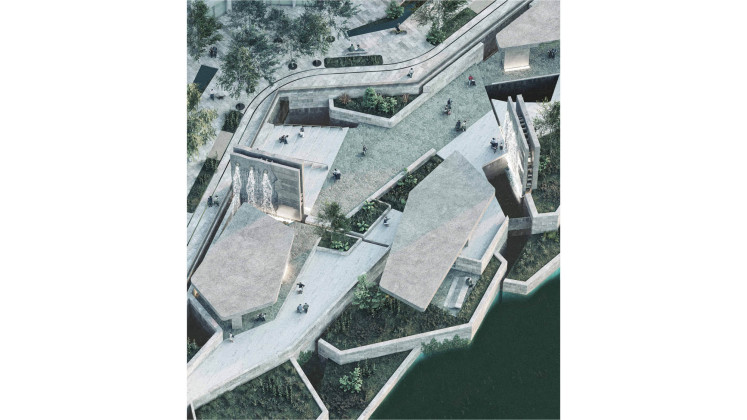 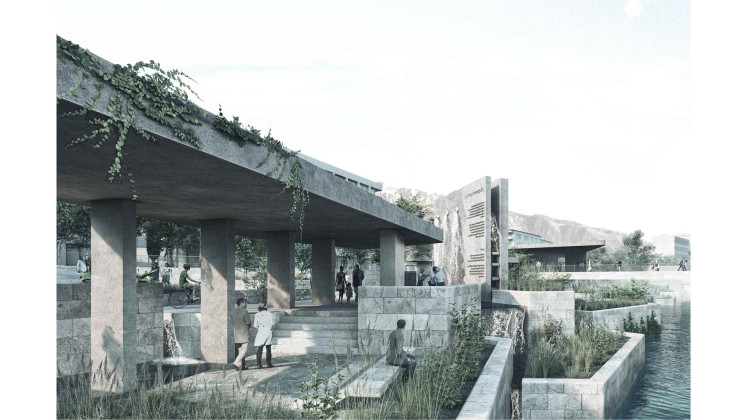 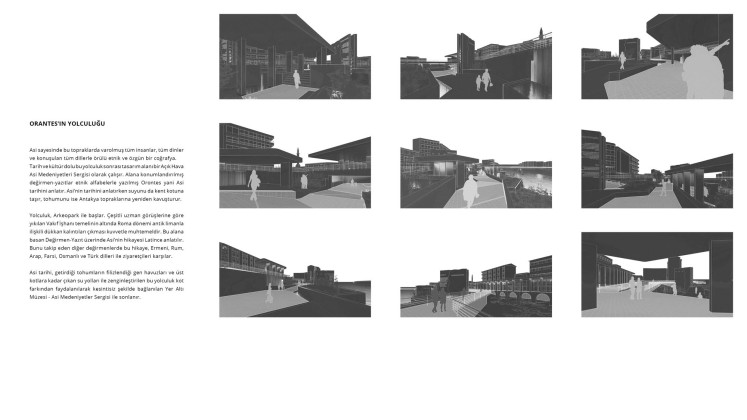 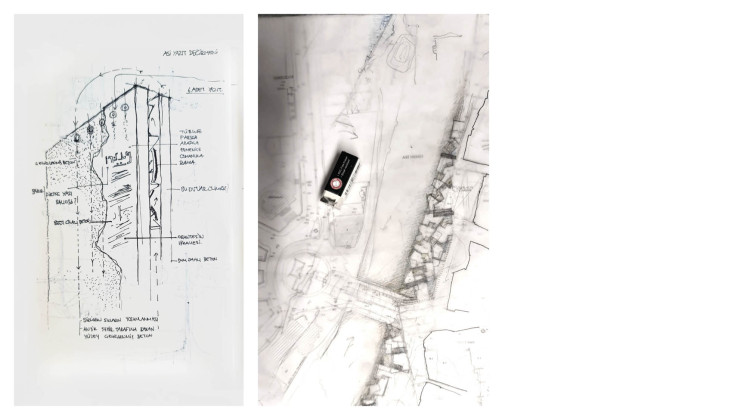 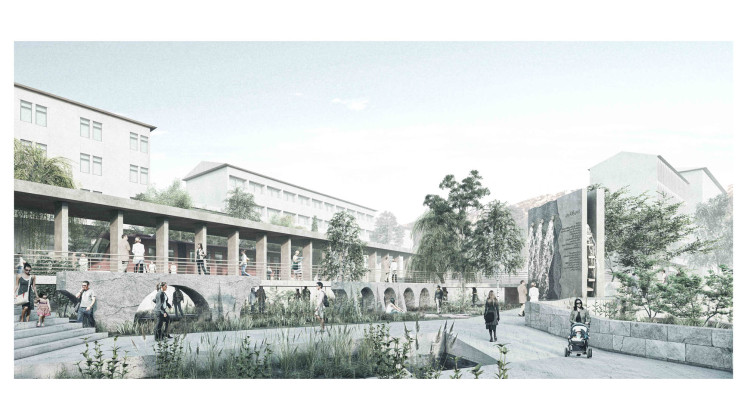 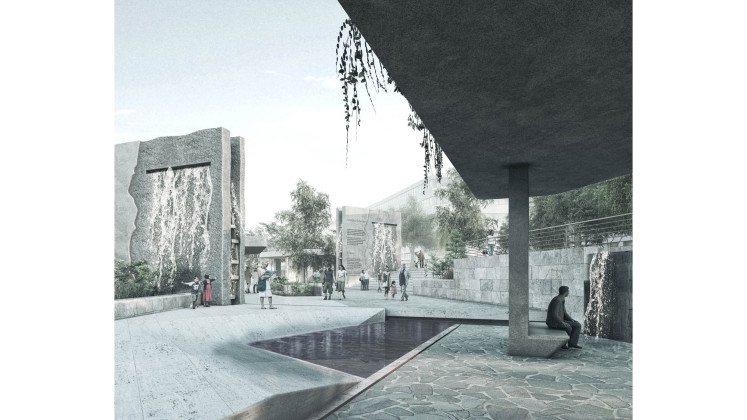 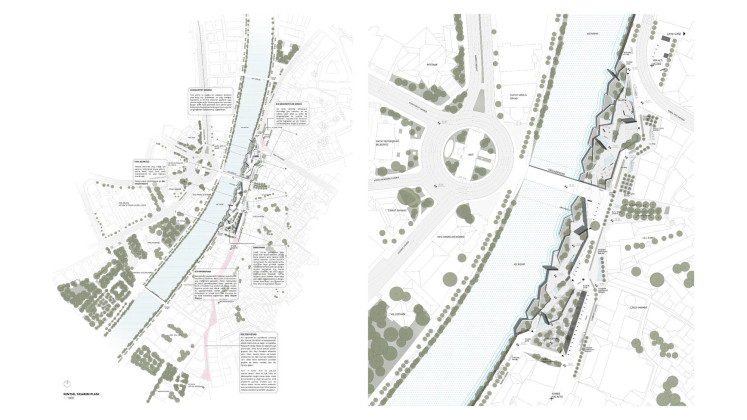 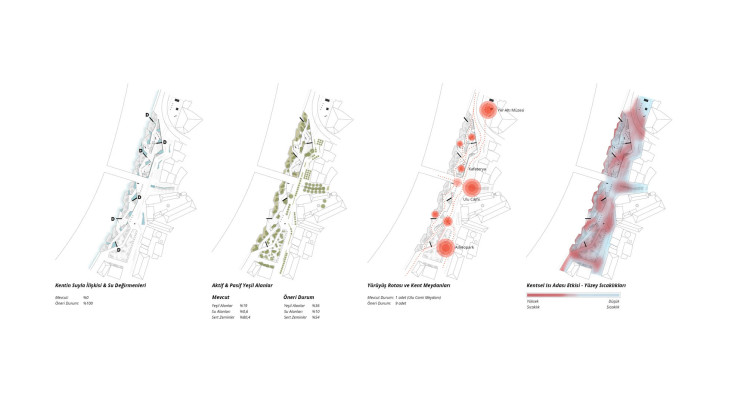 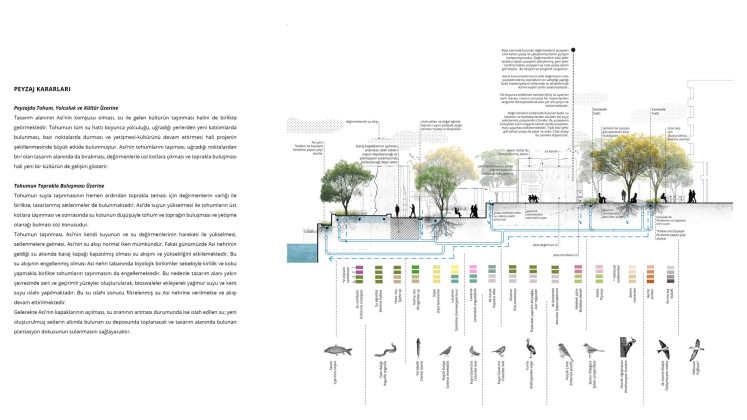