As the City of Calgary continues to cultivate growth within its urban core, the success of new public spaces will be defined by their ability to become entrenched in a continuously transforming context while adapting to the changing seasons and anticipating the unpredictable. C-Square marks a moment in time where a dramatic evolution of the City Center is taking place. Located in the new East Village development, this project will become a hub for urban connectivity in an urbane condition.

The existing site is challenged with the anomaly of the C-Train (Calgary’s Light Rail Transit) which runs north to south-west through the site. Infrastructure is what drives the existing site condition; in this infrastructural landscape how do we create a dynamic, habitable urban condition? By sharing the function of transit as a utility for movement, and transforming it into a place of social exchange, this project re-conceptualizes infrastructure, as the opportunity to influence conditions of social spaces and construct inimitable spatial experiences. 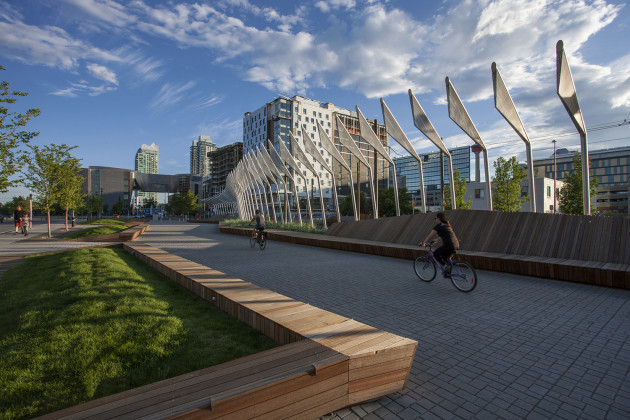 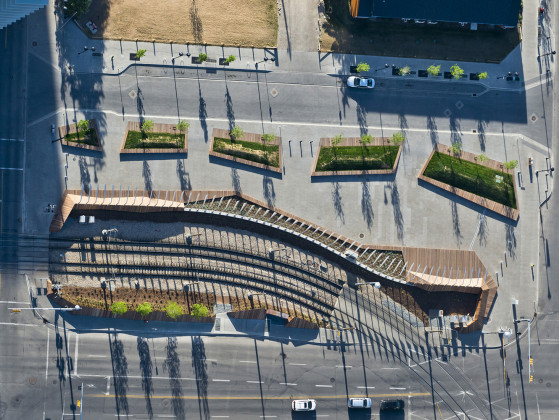 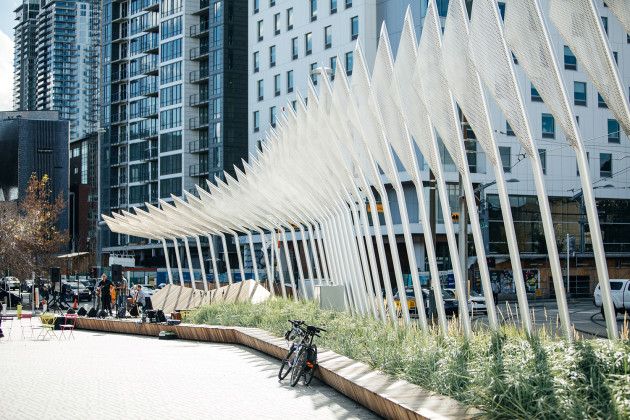 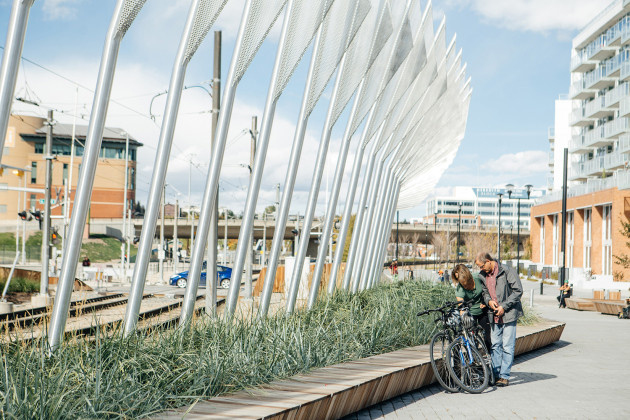 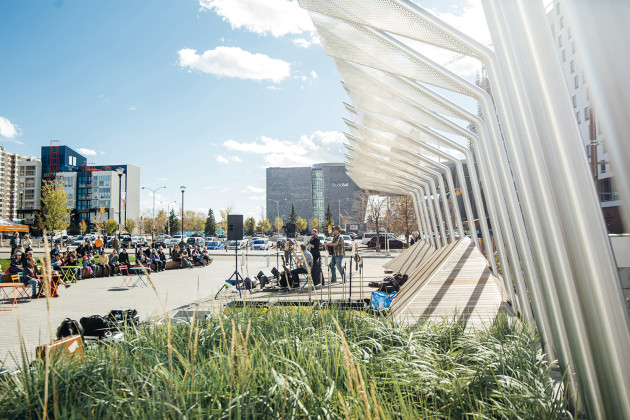 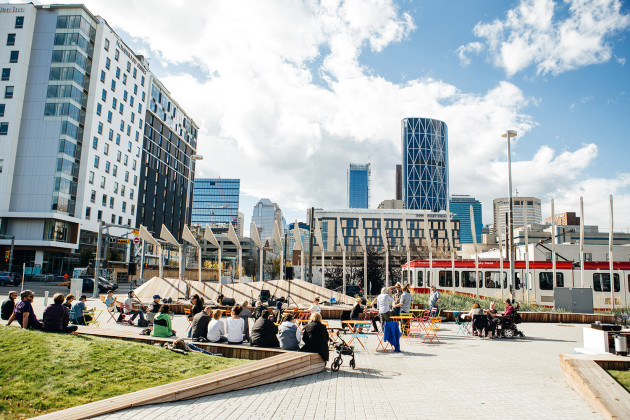 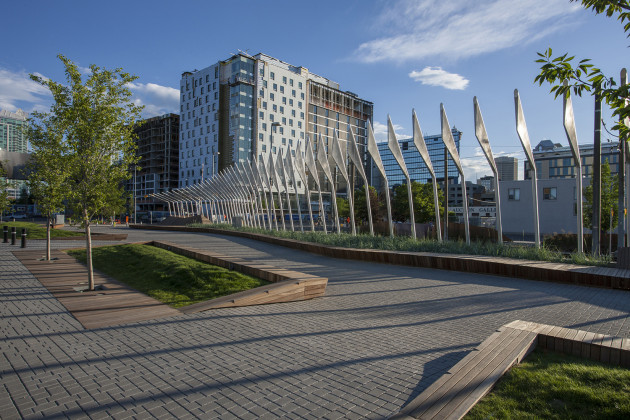 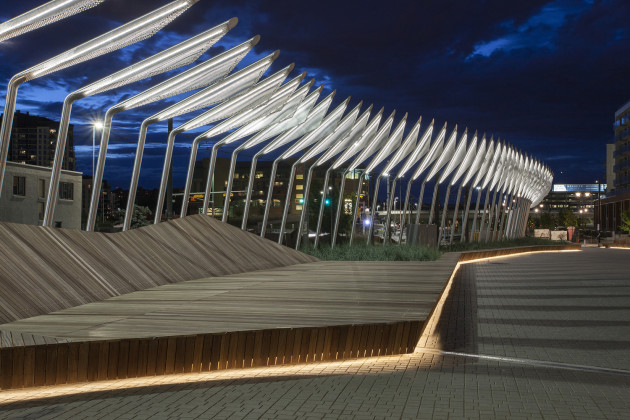 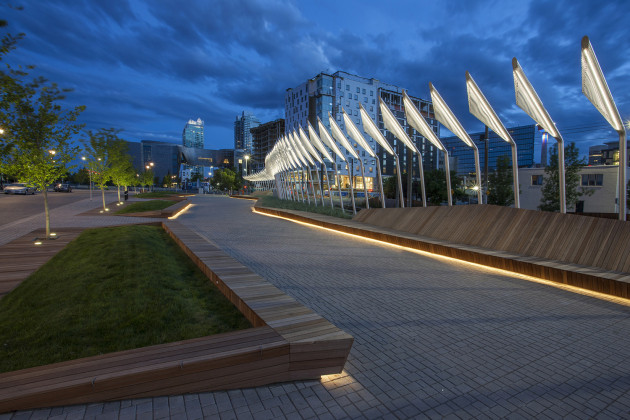 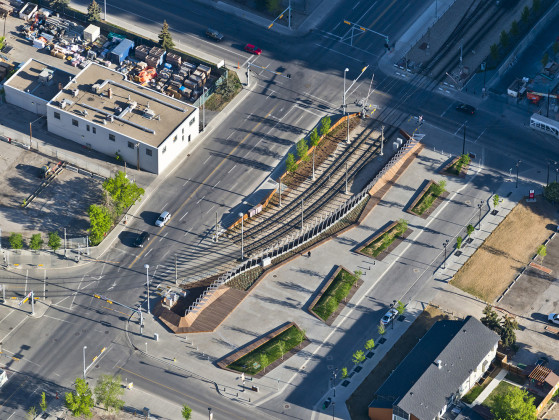 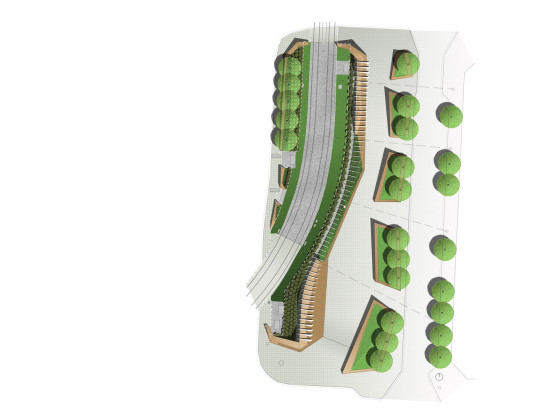 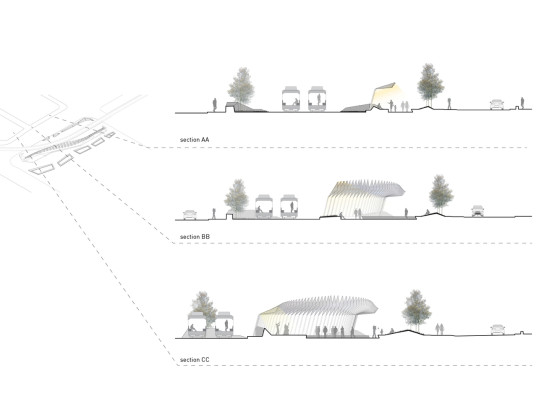 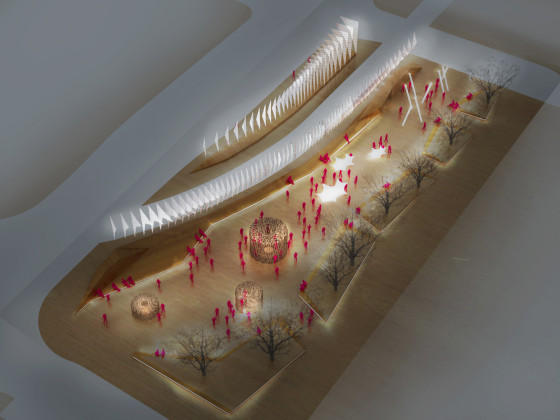 Two conceptual drivers structure the design of this project. The first is the transformation of the existing C-Train infrastructure into an infrastructure for the animation of the public realm. Here, a new tectonic array of perforated aluminum fins, designed to capture and emit light as a shifting, reflective veil, frame connections to and from the train, project the energy of the train into the public space, and turn an existing site liability pasif into spatial animator.

The second conceptual driver is the creation of a continuous ground-plane that sutures the site as a whole while transforming to adapt to various modes of occupation. Site-specific transformations of the ground-plane anticipate multiple forms of engagement and occupation, facilitating the necessary flexibility to allow the public realm to adapt. Two specific transformations of the ground-plane include folds defining an amenity spine along both edges of the train tracks and a spine of shifted plates along the public space’s east side creating a permeable and inhabited edge

Situating infrastructure as a celebrated social interaction, C-Square’s anticipates both informal and structured activity within a variety of habitable conditions creating animation day to night, season to season, year to year. Today C-Square will be known as a prominent evolution of the City’s urban core; tomorrow, it will be engaged, reclaimed, and constructed by citizens and visitors alike