Melis Ugurlu looks into free spaces created via music as the underground music scene has become a symbol of resistance against oppressing powers, from New York to Tbilisi

“Tor auf!” (“Open the gate!”) marked the “the greatest street party in the history of the world”1 on November 9, 1989 when East Berliners reunited with the West for the first time after decades of separation, upon the fall of the Berlin Wall.

While the demolition of this ideological and physical barrier signified the first step towards a united nation, the celebration of reunification was greatly communicated through music: Crosby, Stills & Nash performed the song “Chippin’ Away” and Leonard Bernstein gave a concert in Berlin including Beethoven’s 9th Symphony (Ode to Joy) with the word “joy” altered to “freedom.” The transformation in the urban structure that led to social and cultural change has also initiated a new form of underground party scene, driven by the growth of the electronic music, immediately becoming a symbol for freedom and unity.

With the fall of the wall, more than a third of East Berlin’s properties were left unoccupied and the music style “techno”, originated in Detroit, came to West Germany in the late 1980s. The young Berliners, filled with joys of relief and newfound freedom, utilized these abandoned and ownerless buildings with low rent prices to celebrate their union, through music and underground scenes. These endless parties were powered by creative energy and creative use of space that were illegal and nomadic in every sense. Run-down warehouses, power plants, bunkers, and hangers transformed into temporary “clubs”, avoiding long-term planning and legal authorizations or restrictions. All over from east and west, people came together, danced together with music as its driving force. This energy was what spearheaded the early techno scene in Berlin, which has since pioneered underground dance and music scenes all over the world. 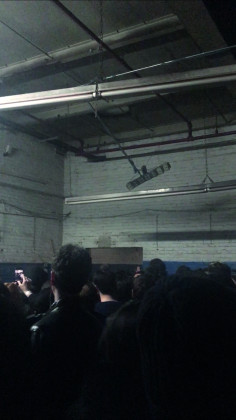 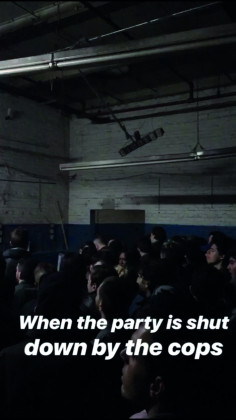 Today, a similar culture of resistance and spirit of solidarity, against oppressive forces targeting individualization and separation, exist in the underground electronic music scenes of New York. Heavily tied to the reciprocity between temporal placemaking and its ideological underpinnings, underground music has created spaces of emancipation.

Brooklyn is the capital of underground electronic music scene in New York. Its urban landscape and industrial history provides a plethora of deserted and vacant spaces, creatively reused by pop-up parties today. These underground pop-up music events employ a nomadic process that transforms what were previously non-places2—abandoned churches and warehouses, former submarine plants, boats, gardens, roofs, basements, storages. There is an element of unexpectedness in its nomadism: the location of the next party is always unknown and shared via text or email only a few hours before the start, to those who have RSVP’ed. Contrary to a pretentious concern for exclusivity, this “RSVP for Location” attitude speaks to the true underground nature of these parties: they are scenes of inclusivity, intimacy, and sincerity that “hide” themselves from the accidental unearthing by the less-committed but gathers a group connected by shared values for music and creative expression.

There is an “otherness” linked to the nature of these places that physicalize Foucault’s “heteretopia” described as being “not oriented toward the eternal… rather absolutely temporal”, such as “fairgrounds” that take over “empty sites on the outskirts of cities”, and exercise a “presuppose[d] system of opening and closing that both isolates them and makes them penetrable,” making the heterotopic site “not freely accessible like a public place".3

Underground music scene of Brooklyn perforates the solid ground of the commercialized, regulated mainstream, creating non-hegemonic spaces of ‘otherness’ for free expression and resistance of normalcies and surveillance. An interesting relationship between the space and act surfaces in such scenes: How can the construction of a particular space communicate social, political, and ideological messages that lie beneath the act that occurs in it? What is the significance of a site of “otherness” to the content it holds? In other words, how does the place of music represent the ideas behind music?

Marshall McLuhan’s famous words “medium is the message” comes to mind in seeing the critical link between the manner in which the music is delivered in the underground scenes and its content. The places of Brooklyn underground music, by being characterized as nomadic, raw, repurposed, and uncensored, demonstrate the urge to de-institutionalize and foreground music. By the very nature of being freed from associations and behaviors that are commissioned by the regulatory conformities of an institution, the music scene, and its community, is relaxed, open-minded, and diverse. People of all ethnicities, religions, genders, and sexual orientations are welcome; there is no judgment, proper behavior, or dress etiquette. The ideologies that govern its placemaking stand against a “discipline [that] fixes”, typified by Foucault as an “anti-nomadic technique” that “arrests or regulates movements” by being exactly what it tries to dissipate: “compact grouping of individuals wandering about the country in unpredictable ways”.4 These ever-changing sites are demarcated lands of freedom, outside of governmental control, that spawn a community of diversity and liberty of expression.

The principles behind Brooklyn’s underground music and its sites confirmed to be a form of free expression by becoming a public sphere for revolt in the recent shut-down of one of these pop-up parties that took place at an under-construction warehouse in Brooklyn. Despite being situated at a highly frequented intersection of the popular neighborhood of Williamsburg, this three-story warehouse, built in 1920 and originally dedicated to industrial and manufacturing land use, was raw in many senses. Moving through the large entrance with a high ceiling framed by concrete walls that immediately rendered a brutalist atmosphere, we passed through a tight opening—about four feet in length and width—in a brick wall, marking the passage with an arrow, when we started hearing the bass first. Upon further traveling, we climbed down the stairs to finally enter the rabbit hole of the underground electronic music. Right before the main DJ took the stage, we noticed some sharp flashlights reflected on the bodies of dancers followed by the abrupt disappearance of sound and invasion of intense fluorescent lights. Music had stopped, dancing had stopped, and the space looked completely different: empty. Once the party attendants were removed off the dancefloors and to the entrance of the building, waiting to be let out, a sense of frustration, followed by resistance and unity, started to kick in. Packed in this space, standing only an inch away from the next person, this large group of people started chanting slogans of freedom in reaction to the unwanted ending of music and dancing. The voices were loud, strong, and in unity. The forceful interruption of the party had sparked a resolute protest.

This protest for “freedom” was by no means addressed to or dismissed the legal and safety reasons that ended the party. The fire safety issues were undoubtedly valid (New York City Fire Code Chapter 10 on Means of Egress states “All required means of egress, including each exit, exit access and exit discharge, shall be continuously maintained free from obstructions and impediments to immediate use in the event of fire or other emergency”5). Rather, this interference was perceived as an attack to what these underground parties stand for: freedom and creative expression.

In a manner befitting these values, the party attendants freely expressed their beliefs and frustrations in a unified act of resistance that was a reaction and fight against all oppressive power over emancipation. At that moment, the entrance of this Brooklyn warehouse became a public sphere for its community to speak their voices about freedom—freedom of thought, freedom of expression, freedom of dancing, freedom of music, freedom of ‘otherness.’ In the early morning hours of March 25, music has once again proven its agency to bring people together and be revolutionary.

Upon exiting the venue, the scene of formerly music and now revolt, I began to think about the influence these underground music spaces had over constructing a certain type of community and society. I overheard a fellow attendant, perhaps one that is less familiar with the NYC fire code, ask why the party was shut down—to which a friend mockingly responded: “Because we are criminals. For listening and dancing to music.” Foucault’s take on modern societies ringed in my ears: “the whole indefinite domain of the non-conforming is punishable.”6 Were we criminals? Perhaps, in the eyes of some, punishably.

Or perhaps every single person on the dancefloor that night was what de Certau would call “ordinary man.” Michel de Certeau believes that the users—ordinary people—who are not merely passive but active, have the power to creatively resist and alter the already existing products (and spaces) of ruling systems that are imposed upon them, through practicing individualization of mass culture, re-use, and appropriation in their everyday acts.7 Brooklyn’s underground music community consists of many “ordinary men”, who challenge and subvert oppressive principles through the simple act of dancing and music. The repurposing, or appropriation, of legal buildings and properties owned by the government —“poaching” in the territory of others8— is in itself an act of defiance. Spaces of revolt could not merely be constrained to the city squares or public spaces with organized gatherings, but also, and perhaps most powerfully, the everyday underground.

From Detroit to Berlin to Brooklyn, the underground music community defies oppressive limitations and demonstrate freedom everywhere around the world. A rave taken from the club to the parliament building as a response to the recent government shut-down of the Bassiani club in Tbilisi, Georgia is another proof that music can produce a form of rebellion. The protest that included not only slogan banners, but also DJs playing music and thousands of young people dancing to it has shown that “the electronic music community is much more than just a bunch of kids dancing to techno—it’s a large scale social movement, standing for the freedom of expression and progressive, international values”.9

For the underground music community, quite literally, “a revolution without dancing is a revolution not worth having”.10 Music creates a free space and we shall keep dancing (together) in it. (Just RSVP for its location).

NOTES
1 One journalist wrote in describing the scene when the Berlin Wall fell. https://www.history.com/topics/cold-war/berlin-wall
2 Nonplace is a term coined by the French anthropologist Marc Augé in his work Nonplaces, introduction to an Anthropology of Supermodernity, and used here as an opposition to “anthropological place,” and does not empowers one identitity, or create a space to meet other people or share social references.
3 Michel Foucault, “Of Other Spaces,” Diacritics, vol. 16, no. 1 (Spring 1986): 22-27.
4 Michel Foucault, Discipline and Punish, trans. A. Sheridan (New York: Pantheon, 1977): 218-219.
5 2014 New York City Fire Code, Chapter 10 Means of Egress, Section FC 1027 Maintenance of the Means of Egress, 1027.3, First printing July, 2014.
6 Michel Foucault, Discipline and Punish, trans. A. Sheridan (New York: Pantheon, 1977): 179.
7 Michel de Certeau, The Practice of Everyday Life, trans. Steven Rendall (London: University of California Press, LTD, 1984)
8 Ibid., xii.
9 Boiler Room, a channel for “broadcasting the underground,” posted this statement in their post description for the first Boiler Room event held at Bassiani after its reopening, May 24, 2018. https://www.facebook.com/search/top/?q=boiler%20room%20bassiani
10 These words were used by Alan Moore’s fictional character “V” in the movie “V for Vendetta” that were paraphrased from the statement of the American feminist and anarchist Emma Goldman. 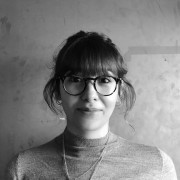