The form in architecture initiates with the instincts of humankind to provide safe haven and protection and later on differs depending on the understanding of each period of history. This differentiation changes due to specific cultural, social and geographical features of the era as well as machinability of the used materials accordingly. Thus; examination of any architecture becomes a multi-layered process which cannot be reduced to one photographic image. Nevertheless, the first contact with museum architectures is made through the form. The experience prospers with the discovery of each new parameter and detail as the interaction with the structure deepens. It goes in the same direction at the Vitra Campus and proceeds through the dialogues established through structures which are quite different from one another.

Vitra Haus
At the entrance of the campus, the Vitra Haus creates an excitement with its extraordinary architectural spine, whispering to visitors the first hints of approach about the design of settlement. It is designed by Swedish architects Herzog & de Meuron in 2004, with the purpose of displaying Vitra home collection. Nowadays, the building is used both as a showroom and museum. At first encounter, the building revives feelings in visitor to explore the design from many angles. Immediately afterwards, this feeling is triggered with an instinctive urge to navigate around the building while conveying the information that the architecture cannot only be perceived from a single perspective. Naturally, the first source of all these is the exciting shell of the building. A while after this stylistic admiration, the design decisions, that could not be perceived beyond-the-from at first glance, are noticed as getting in contact with the structure. 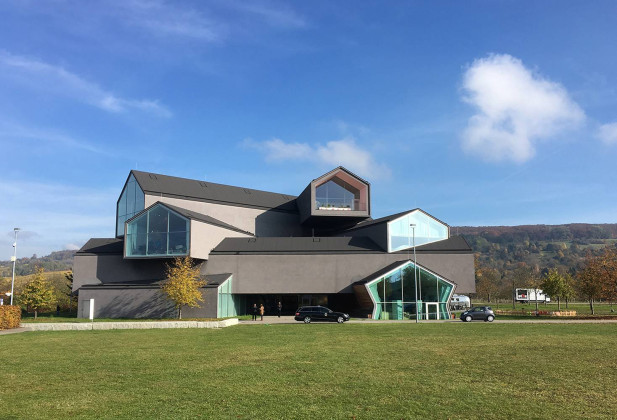 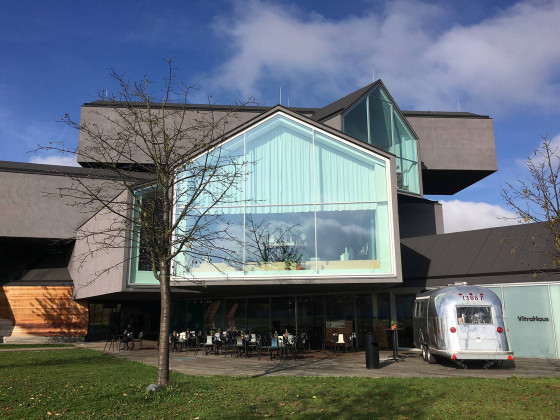 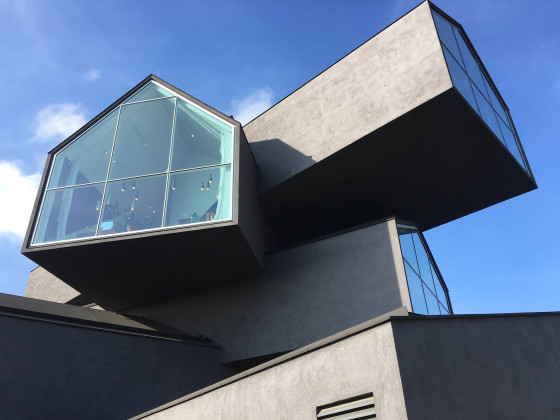 The balance of the space and occupancy at the entrance of the building, in particular, and alliance of these volumetric estimates with the right materials create an incredible impact – something that animates along a pleasant feeling of “being-in-between”. There is such a defined mathematical fiction at this intermediary venue of the architecture; the area can be identified as neither open nor close. The feeling of security that stems from being sheltered indoors combines with the sense of freedom of being outdoors. It’s like the perception of an exterior space which is isolated, in one way, but not abstracted. At this point, verges of the architectural shell that separate the visitor from universal vacuum become vague.

The combination of dark wood, which is preferred as the floor mat, followed by light-colored solid seating areas and coal-colored plastered units shaded from different angles surround the visitor. The light travels through the distinctive patterns and textures shaped by woods along with the vivid colors of plastic seating units. Black units form an impressive background to this dynamic composition with a sort of Caravaggio effect. Lounge Chair Atelier, as being one of the most interesting sections of the museum, is inserted at the most delightful place of such plain yet balanced composition. Production stages of the legendary design of Lounge Chair & Ottoman created by Charles & Ray Eames in 1956 can be watched here. Thanks to large windows and thin frames, the monitored place becomes a movie set.

In the architecture where contrasts take the leading role, soft but unexpected forms are placed inside the angled, rigid outer lines. Due to correctly fictionalized height of the construction, it occupies a smaller place in nature compared to similar ones. The architecture is designed with five floors, with the widest distance between the two ends being 57 meters while the longest width is 54 meters and the height is 21.3 meters. The intersecting settlement of these five independent buildings makes the design look like a randomly placed mass. The feeling created by linear direction of intersecting volumes, in fact, arouses curiosity about the things awaiting visitor inside.

Only bright parts of the architecture, which is in harmony with earth-tones, appear to be the windows covering almost the entire triangular roofs. They perform an important framing task for the designs displayed inside and become glittery at night while shining from inside-out. This framing creates a dual function. When viewed from the outside it constitutes a quite impressive frame for the interior designs; whereas from the inside it borders faces dominating the nature and enclosed squares of Weil-am-Rhein-view which resembles a painting.

The breathtaking forms on the outer surface of the structure are transformed into free areas where occupancy and blanks coincide. It is perceived as a whole by the construction of its places, masses, surfaces and the spaces created in the compactness. In fact, it turns the blanks into concrete tangible parameters that can be touched and seen as well-defined volumes. Maneuvers in the ways of connecting these volumes together amaze the visitor. It is also enjoyable to be able to meet the surprises of intermediary venues while drifting from one side to another with enthusiasm. The building consists of a conference room, a sufficient space for chair collection of the Vitra Design Museum, the Vitra Design Museum Store, a reception lobby, restrooms, a cloakroom and a café section. The floors formed by the crossed and interlaced modules, on the other hand, are tied up with spiral staircases. 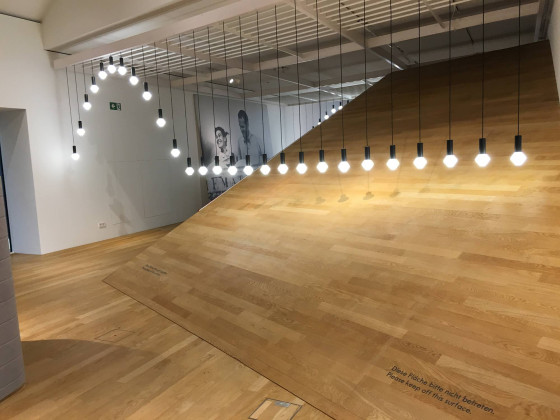 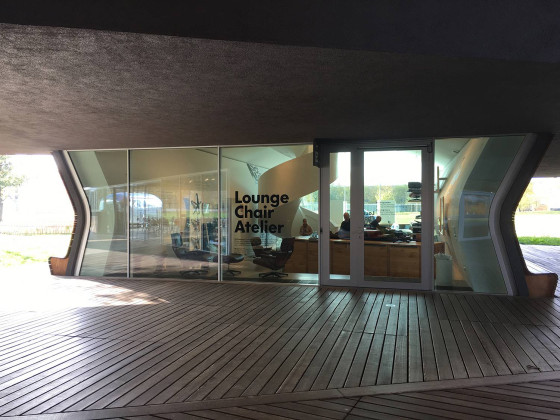 Vitra Design Museum
The Vitra Design Museum is founded with a vision of analyzing the past and present of the design from a perspective of art, culture and architecture. The process begins with the collection of designers’ furniture that has influenced the stages of its development to document the company’s history. As the collection expands over time, the need for an architectural place to exhibit products arises. While it was foreseen to be an exclusive collection museum, products of designers such as Charles&Ray Eames, George Nelson, Alvar Aalto, Verner Panton, Dieter Rams, Jean Prouvé, Richard Hutten and Michael Thonet are included later on. Therefore; the museum collection becomes comprised of furniture designs from significant modern designers. Besides these objects that are the milestones of design history, various things such as cutlery or consumer electronics along with artifact of architectural models also take part in the repertory.

The Museum is designed by Canadian architect Frank Gehry. The fact that it’s the first project of Gehry in European continent makes it pretty intriguing. The architecture attracts a lot of attention while nurtures itself with the interaction of surrounding structures’ contrasts as well as its own dynamic geometry. The strong plainness of Tadao Ando’s Conference Hall stands in harmony with Balancing Tools Sculpture by Claes Oldenburg.

Spreads over 8,000 square meters the design consists of a series of volumes being constructed in two layers in a dynamic composition. It was designed in de-constructivism style, the same way as other projects of Frank Gehry; though it differentiates at the point of using different materials together. The incompleteness effect created by the metal leaves its place to the use of white plaster and titanium-zinc alloy. Instead of reflective curved surfaces, defined bulks of massive surfaces and geometries are preferred. Moreover; the approach of breaking apart angular forms rather than curvilinear ones is applied for the first time in this design. This approach allows the visitors to feel differently when it comes to determined length, width and depth measurements of the gaps. Influences of the gaps, integrated fictionalization of shape and content relation in the museum, are creating an accurate interaction with the visitor.

Permanent and temporary exhibition areas, library, conference room and bureaus are placed on the first floor while galleries are on the second. The staircase that curls along the building draws attention with its complex figural percept and fulfills a duty of focal point in some way. It constitutes a connecting position as a circulation element among the gaps. Rhythm of the architecture can be felt at the places on the eastern corner of intersecting masses of the building and at galleries from the second floor. Each volume, while being independent on its own, is perceived as clustered within the layout. It feels as if it’s dragging the visitor at an architectural rhythm while passing from one particular area to another. Even in the roaming scenario, it is kept pace with this rhythm while being instinctively present in time. The state of synchronizing stems from the attitude of architecture which is receptive and inclusive. It is kind of like feeling the heartbeats of the architect. Because when the structure itself is straight ahead of you as the extension of its designer’s biological rhythm, synchronization with it is like sharing the designer’s mind and the spirit which he seeks to embrace. Each object seems to correlate with one another as though connecting the mind of the visitor with the architect’s. Thus; the architectural experience becomes alive, sensible and livable from the perspective of visitor.

Buildings in Vitra Campus are constructed in a way that resembles giant storages filled up with design objects. Instead of a communication that depends on one single mode, various styles of architecture enter into fully unique dialogues with visitors. In the settlement, it is possible to separately hear each tone of the structures as well as the subsequent harmonic melody they compose together. The places, in the process, do not merely stay as we see but rather turn into spaces in which we live, feel, integrate and approach with insight. Thus, while the visitor is living fluid experiences among architectures, he/she also abolishes the state of being passive. 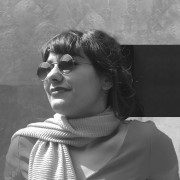